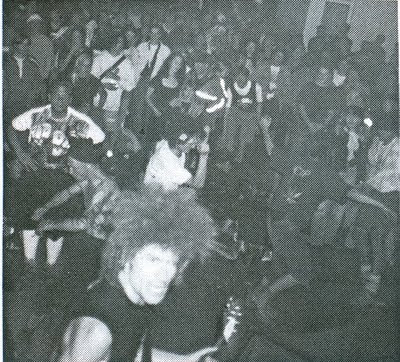 From the first time I met Markus, I was affected. "Wuuauoah," I wish there were a way to put that voice onto paper. -Therese Joy Madden


When Markus moved into our flat on Valencia Street he livened it up with his kaleidoscopic spirit.  He wore a furry vest and knickers and whatever pattern or color happened out of the laundry.  He said he didn't believe in colors not matching, and he mixed three or four different types of cereal in his bowl every morning. We had fun times that year. We didn't know he was coming apart at the seams, except that he occasionally woke up in the middle of the night screaming bloody murder because one of his arms had come out of its socket, or he'd be vomiting so loudly that he rivaled the Fog Horns in San Francisco Bay.

Markus Cook was more than a fixture on the San Francisco bike messenger and music scene.  He was an organizer and a mobilizer with resounding vocal chords that needed no help from a bullhorn.  He had an infectious personality and an irrepressible drive to build community among the people he touched, from shared meals at our little Mission flat, to mass bike rides in SF, to global messenger solidarity.  He published a zine of bike messenger writing called Mercury Rising and was a major force in the creation of the SF Bicycle Messenger Association, which, short of a union, was able to create some unity and advocate for the thousand or so couriers pedaling the streets for a living. 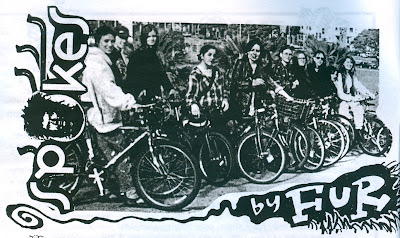 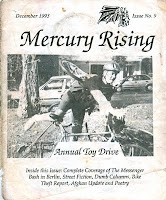 How about hosting the next Bike Messenger World Championships here in SF in the summer of '95? Wouldn't it be cool to get to know messengers from everywhere?  It's going to take a couple of dozen people who are ready to take on a major project for the next year-and-a-half, and a lot more people to help out later.  Though I'm still reeling from CMC '93 and L.Sid's Berlin to Berlin Tour, I'll gladly join the effort if it comes together.  I think this town needs to be overrun by a thousand bike-freaks as much as our world-wide tribe needs to be solidified by another gathering. -Spokes, by Fur (Markus), Mercury Rising, December 1993 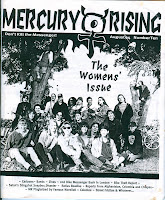 As I lay drugged and listless in my bed at General the day after my shoulder surgery, my roommate came in and told me he had just seen a group of Western Messengers on their way to visit a fallen sister who had her pelvis broken by a car.  Damn, we keep those hospitals busy.  This got me thinking about what the SFBMA is and what it could be.  We spend thousands every week at the same few bars. If a couple hundred people siphoned off a mere 5 bucks a month and dumped it into some kind of emergency fund thing, that would be $12,000 a year, to help people and invest to keep our fund going.... Might work, I dunno... could strengthen the messenger community in a variety of ways.  - Spokes, by Fur, Mercury Rising August 1994 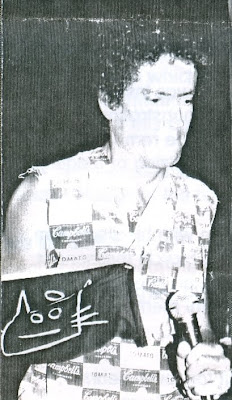 L.Sid was another outlet for Markus's philosophy and unstoppable energy, with its mashed up confusion of musical styles, instruments, and pseudo-political, absurdist, sci-fi subject matter.  Just like all of his activism, Markus was a key organizer, but never dominated the action.  He pulled everyone together and created a vehicle for each person to shine at what they did best, to the benefit of everyone involved.  He'd go boinging around the stage while the band diverged into stratospheric jazzy solos, occasionally barking lyrics and props to his bandmates.  He surely vied with James Brown for "hardest working." At one show he was flailing around the stage and suddenly fell screaming after dislocating his arm (again).  After a rush to the emergency room to get it popped back into place, he was back on stage to finish the set within the hour.

L.Sid released Alive 1995 on cassette, complete with intergalactic radio interference; from a show at the Covered Wagon Saloon. Sunflowerz is from a studio session at Mindfield, included on Pothole, an SF bike messenger band compilation.

Sadly, Markus died of a heroin overdose on January 3, 1996 after struggling for several months to to get clean.


Markus Cook was a politician, a poet, a great orator, and a loyal friend. As far as 'front men' go, I would put him right up there in the same category as David Byrne, Iggy Pop, and Joe Strummer. I recall one day, we climbed up on a giant billboard near Bernal Heights, and shared some 'medicine' and philosophical talk. At one point, he looked down on the panorama and said, "Someday...I'm gonna miss all this."
Moral: Live every day as if it were your last.
Rest in Peace, brother.  -Jack Chandler

Earlier members:
Adam Kahan - Bass
Matt Broiler - Guitar
﻿
Jack played in The Wellsprings of Hope and Tim Hesla's Big Band and currently plays in Ice Age Jazztet. Tim played in Necropolis of Love and The Wellsprings of Hope, and his Big Band of course. Chad was a founding member of Polkacide and currently plays in The Gallimaufry Orchestra. Billy was previously in Boston's Hell Toupée. Carl is playing with Smokestaxx and Montalban Quintet. Adam later formed Orson County Line.  Luigi played in Derailleur and The Converse All Stars. I just learned that he died in a house fire in 2009.
﻿
More info from Sector L:
Here's the full Alive 1995 cassette posted on It Crawled From the Vault (Thanks Bluoz!)
An extended article about Markus in SF Weekly: Mercury Falling
Moving Target Magazine: Messenger Hero #4
Moving Target Magazine: The Markus Cook Memorial Award
Video interviews with Markus
Messenger Memorial: Markus "Fur" Cook
Messenger Memorial" Lou Decolator "Luigi"


To My Little Brother,
This wasn't supposed to happen. Your life was not meant to end this way, this soon. This was not your destiny. There are too many things you still have to do.... And I'll never understand why....        - Kim Camille Cook 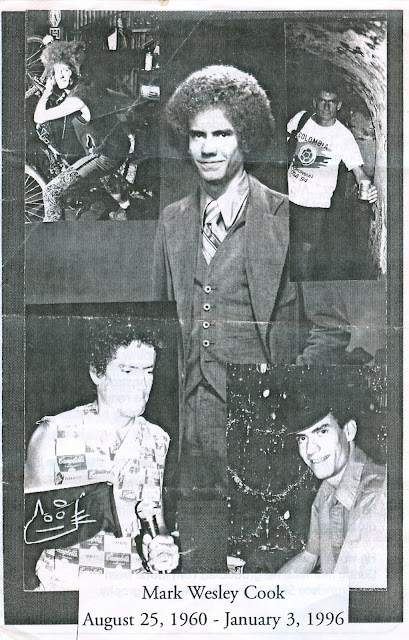