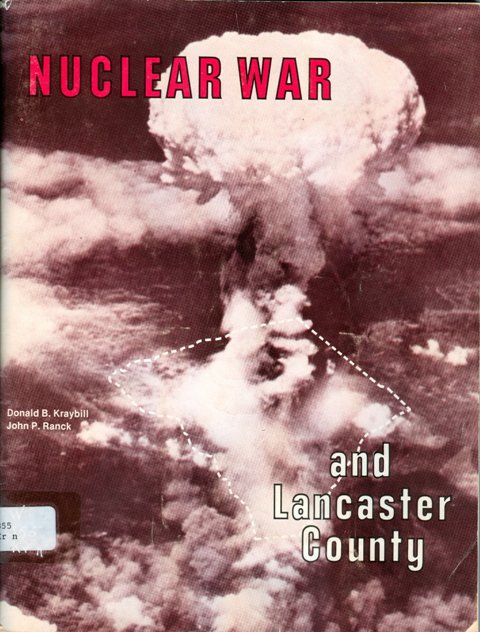 Is there a Soviet Intercontinental Ballistic Missile somewhere with the coordinates N 40:02:24, W 76:18:23 already entered into its guidance system?

This isn't exactly a music post, but it fits in with my exploration of things from my hometown that had a particular impact on me. So here's a soundtrack to set the mood while you read on. Press the Play button:

I think about all the fear-mongering going on today and the ways that fear has been used in the past.  What has changed? Growing up in the 70s and 80s there was a lot of really scary stuff in popular culture that got me simultaneously freaked out and fascinated:  Big Foot, The Loch Ness Monster, Project Blue Book, In Search Of...the Bermuda Triangle (and others), Creature Double Feature, Edgar Cayce, Nostradamus, Ronald Reagan.... 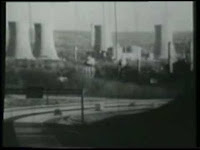 I was 10. We lived close enough to Three Mile Island to evacuate in 1979, but before we left town, my friends and I would run up to the windows and scream, "I'm melting!!!" and crumple to the floor quivering in make-believe agony.

If that wasn't enough to set a maudlin stage for my teen years, my father is a physician and was Lancaster's county coroner at the time.  His beeper would go off at all hours of the day and night; usually to treat the living, but often to go and pronounce someone dead.  I overheard some pretty horrific stories of victims of fires and auto crashes.  He never went into detail, but I would catch just enough to set my imagination off (the baby under the wheels of the Mack truck makes me squeam to this day).  I'm sure dealing with one or two dead people at a time was bad enough.  So dad, what would happen if there was a nuclear war?

In 1981, dad brought home the newly released NUCLEAR WAR and Lancaster County, by local sociologist Donald B. Kraybill and chemist John P. Ranck. It was published by Physicians for Social Responsibility to counter the "Duck and Cover" and fallout shelter stupidity of earlier decades.  The book views the nuclear threat as a medical issue "citing the first principal of the medical profession — that doctors have an obligation to prevent what they cannot treat." It sets out to evoke fear of The Bomb, but not in the same way that fear was used in early cold war propaganda: to rally general anticommunist fervor or to scare people into stockpiling canned food.  But rather to really scare the complacency out of us Lancastrians by describing in minute detail the total obliteration of our own land, friends, and families.  Talk about driving it home!  It was part of a global campaign to disabuse the public of the notion that a nuclear war was winnable, or survivable and to mobilize people at a local level to demand a reversal of the arms race. Physicians for Social Responsibility won the Nobel Peace Prize in 1985 for their efforts to prevent The Final Epidemic.

At age 12, I was already somewhat convinced that the world was going to end in AD 1986 because of some vague prophecy by Nostradamus brought to me by a grave and turtlenecked Leonard Nimoy.  This was also right around the time The Day After was aired on ABC and I just knew Ronnie really hated the Russians. He was surely going to push that button before he left office! 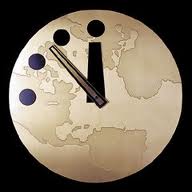 It turns out, I had reason to be concerned.  The Bulletin of the Atomic Scientists in 1980 moved the Doomsday Clock to seven minutes before midnight because of a shift in weapons technology and military strategy from deterrence, toward first-strike capability making "limited" nuclear war "thinkable" for the first time in twenty years.


The Soviet Union and United States have been behaving like what may best be described as "nucleoholics"--drunks who continue to insist that the drink being consumed is positively "the last one," but who can always find a good excuse for "just one more round." (Bulletin of the Atomic Scientists)

So, the book asks, What if a 1-megaton thermonuclear warhead were detonated in the air over Penn Square in the center of Lancaster City? 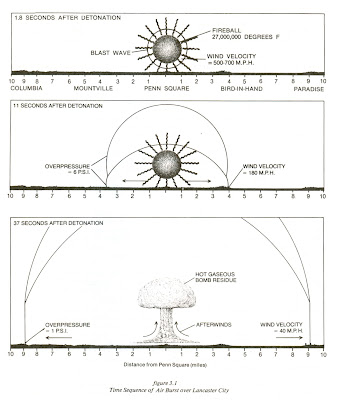 A luminous fireball with temperatures of 27 million degrees F., as hot as the center of the sun, forms in the air 6,000 feet above Penn Square. Because the day is clear, the scorching heat of the fireball burns skin and starts small fires as far as 12 miles away in Manheim, Ephrata, Strasburg and Bird-in-Hand.  As far a 50 miles away in Coatesville and Shippensburg the fireball feels much hotter than the noonday sun.


Lancaster was/is a primary target.   It's mostly known for "Pennsylvania Dutch" culture, tourist industry, and Amish farmland.  However, RCA made infrared-sensing equipment at a plant near my house, and Hamilton Watch Company made bomb fuses in Lancaster plants. The Defense Department had upwards of 50 contracts with businesses in and around Lancaster city making it a likely target in a full scale nuclear exchange. 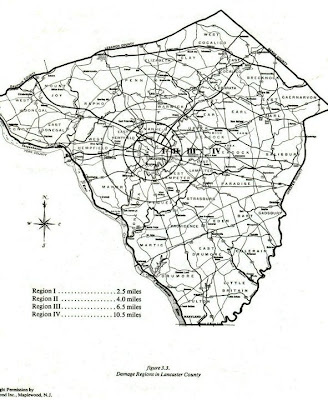 The book divides the effects into five categories: blast, heat, fallout, radiation, and electromagnetic pulse. Then describes the immediate effects of the bomb in concentric regions.


Region I - The City of Lancaster

Within 1 mile of Penn Square, the overpressures range from 20 to 30 psi and the accompanying winds rage nearly 700 mph.... Two and a half miles from downtown, the winds slack off to a mere 300 mph.... The only buildings standing are some reinforced concrete structures on the outer fringe of the region such as parts of Park City Mall [Oh thank God! oh wait...].  Although the reinforced shells are still standing, they are gutted and damaged beyond repair. At best the three hospitals, Lancaster General, Lancaster Osteopathic, and St Joseph's are ragged skeletons poking up through heaps of rubble....

Practically all of the people within this region are killed instantly or die shortly after the blast.  Although some persons are killed by the sudden intense overpressure, most die as they are crushed by buildings or hit by flying missles of bricks, glass and furniture.  Persons downtown who survive the powerful blast are fried by heat, killed by nuclear radiation or trapped under the rubble....  Many in bomb shelters are trapped and suffocate.


In short, life as we now know it in the center of the Pennsylvania Dutch Country ends.... 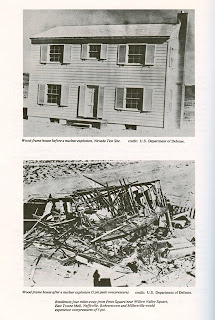 If any group of people in the county would have a chance of survival, it's the Amish, since most live far from town in Region IV and beyond, and they're less dependent on the modern infrastructure. And if you've ever seen a barn-raising you get a sense that, if anyone could, they would rebuild.  The house I grew up in, on the other hand, was in Region II,  and would have looked similar to this one.


Region II
Residences four miles away from Penn Square near Willow Valley Square, East Towne Mall, Neffsville, Rohrerstown and Millersville would experience overpressures of 5 psi.... People in this region without shelter receive third degree burns from the heat of the fireball as well as flames from the fires... there is spontaneous ignition of clothing.... The danger from immediate nuclear radiation is gone since gamma rays generally do not travel this far.

The usual estimate of fatalities for this region is 50 percent.... But in contrast to Region I, a larger proportion of deaths here result from flame and burn injuries.

The devastation and ruin of Region I and Region II combined covers about 50 square miles.... For all practical purposes these two regions are desolate and uninhabitable.

The book goes on to the outer regions, details the medical effects, the shortage of medical care, an incapacitated emergency response system; the delayed effects from fallout, agricultural damage, social and psychological disruptions; and long-term genetic and environmental changes resulting from a full scale nuclear war.  You get the idea. My dad the county coroner...? ...if he survived, would have nothing to work with and no one to work for.

NUCLEAR WAR and Lancaster County concludes with a diagnosis, prescription, and prognosis for The Final Epidemic. I never read this far when I was a kid. But now, thirty years later, even with the Soviet/US threat in remission, the Doomsday Clock is poised at six minutes before midnight!  With today's different threats and fears the diagnosis has changed somewhat, but much of Kraybill and Ranck's prescription has maintained it's potency:


...world stability depends on a more equitable distribution of the earth's resources.  This means that American national security lies in relieving hunger, disease, poverty, and misery throughout the world rather than securing ourselves against the coming assault from the have-not nations by enlarging our arsenals or by playing one nation against another.  Nobody loves the bully and all will turn against him when given the opportunity.  Our nation will be great by being humble and charitable and by evoking the best in others by example....

What does all of this have to do with Lancaster County?  We believe that world events are not entirely beyond the control of the people.... We must make sure that our government is spending our national resources wisely and consistently with the best qualities of the American character....

There's something fundamentally true about these conclusions, regardless where you fall on the political spectrum. If they push that button...you can kiss your ass goodbye-goodbye! 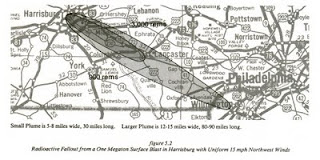 So whatcha gonna do...about your ass?