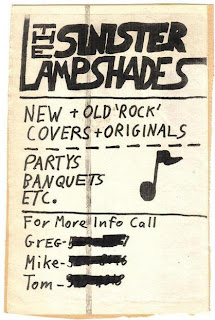 The Sinister Lampshades was my first band. In 1982 or 83 we recorded on our friend Harry's reel-to-reel tape recorder. It was a "portable" unit from the 60s with tubes and it weighed about 50 pounds. We all had cassette recorders that might have sounded better, but it was so much cooler to use that big old machine. It seemed more like a recording studio. I think Harry had about 4 reels that we taped over several times because we didn't know where to buy new ones and we used up a fair amount of tape making burp and fart noises.


Originally, when I was in 6th grade, the Sinister Lampshades was more like a group of friends.... I got the name from my brother Gil's classmate, a dude named Tim. Seems he was a big Zappa fan, and used to recite lyrics and so forth. I came up with the Lampshade cartoon character and the original theme song. 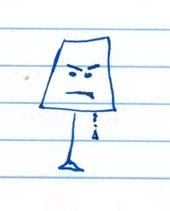 I still have the original lyrics in a scrapbook somewhere. -Greg S.

Then Greg and Mike invited me to join (if I could get a bass). We played a number of backyard parties, school dances and a battle of the bands against heavy metal OSIRIS.


We got utterly destroyed in that 2 way battle of the bands! They had a stage that took up half the gym, pro light show etc.We were playing through practice amps. lol! The student council gave us a sympathy booking at some dance later on. - Mike S.

Strangest of all, we played a Christmas banquet for the 103rd Battalion of the Pennsylvania National Guard. My father was commander and paid us $50. Some of the covers we played were pretty mainstream: INXS, Billy Idol, Tom Petty, Prince, but some must've seemed pretty out there to that unsuspecting audience: The Cramps, The Clash. On listening back to those reel tapes, it's the originals that stand out.

Greg later played in The X-Cellerations and Animation.
Mike is currently with the Towson Steele Solution.
Tom was in The Real Gone, Jack Lord's Hair, Rocknoceros, Mud Pie, and is currently in Mud Pie Sun.