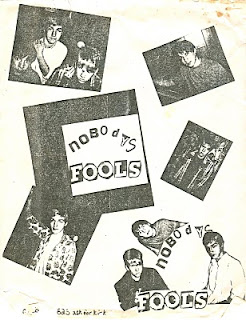 While most of the teenage punkers were thrashing to hardcore in 1985, these three were paying homage to the melodic old-school. Joel, Dave, and Kirk were connoisseurs of the 1977 sound, trading records, and writing songs in the style of the Clash, the Dead Boys, and Stiff Little Fingers with lyrics growling for freedom from life's struggles. There was something amusing about 14 year-olds practicing in their parents' two-car garage songs about social strife, prostitutes, and bloodshed in the back alley. If any of us in our suburban township had ever seen a back alley, the blood that was shed was probably from our knees on a Big Wheel. These songs are from Nobody's Fools first tape, packed with 24 songs, recorded on a boombox and a RadioShack 4-channel mixer. They may have just been learning to play their instruments, but Nobody's Fools did it in style, cranking out dozens songs with hooks to pogo to.

Joel went on to become Jet Silver & the Dolls of Venus, and Kirk and Dave formed Kirk & the Jerks. Dave went on to play in Mystery City and is currently in The Dying Elk Herd.
Posted by tomsun at 12:22 AM