I promised some traditional Hawaiian music, so here we go with a little personal background, some random asides, and a mini-primer: 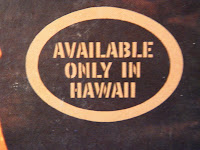 Genevieve and I thought we were choosing the quintessential honeymoon destination.  We figured we might as well go to Hawaii while we were still on the West Coast but my key frame of reference was still the Brady Bunch's tabu-tiki episode.  Fortunately about that time, my neighbor/installation artist/action film star/Hawaiian shirt collector, Rae Culbert played me a compilation of Hawaiian music from the 1930's that completely wowed me with falsetto voices and country-swinglike guitar rhythms.  I all but forced him to give me that LP and set out to find more.

As it turned out, we steered clear of the cities and resorts and spent our time on the Big Island and Kauai. We hiked the trails, and I sacrificed my wife's sweet blood to evil mosquitoes while they barely touched me. We geekily read Hanahana, an oral history of Hawaiian and Japanese workers in the 20's through the 40s.  We booked our rooms one night at a time and we stayed at the historic and humble Manago Hotel in the town of Captain Cook that was an built as a stop for itinerant workers; although we had a bed instead of a tatami.  We drove on roads that the rental car agency said were off-limits and realized why when we a sign that warned of "overhead artillery firing."  Apparently the US Army still uses Hawaii for target practice. We ate lots of lau lau and strawberry papayas.  I don't think we saw one record store the entire time, but we spent as much time in thrift stores and flea markets as on black sand beaches and found a dozen or so vintage Hawaiian records in all their scratchy glory.

"Traditional" music, like luau pork and everything else in Hawaii, is hapa, a mixture and exchange of cultural styles and influences which was not always as harmonious or peaceful as the music now suggests. Hawaiian religious chants were blended with haole Protestant hymns sung in falsetto, the guitar of the Mexican vaqueros was adopted into the slack-key style, and the Portuguese bruguinha became the prototype for the ukulele.  The last monarch, Queen Lili'uokalani composer of Aloha Oe, the most famous Hawaiian song, continued to write music while under house arrest by a gang of US planters demanding annexation and free access to Hawaiian land and labor. The music that developed in the islands became hugely popular in the US and around the world starting in the 1930s and absorbed mainland jazz and popular influences as it became more commercialized. In turn it had a huge impact on mainsteam US music, particularly country.  Just listen to those steel guitar yodelers like Jimmie Rodgers and Hank Williams.

The Alice Fredlund Serenaders, the Halekulani Girls, were a Waikiki hotel act in the 1950s and 60s.  They played traditional Hawaiian songs with occasional novelty numbers thrown in, but they were the real deal. 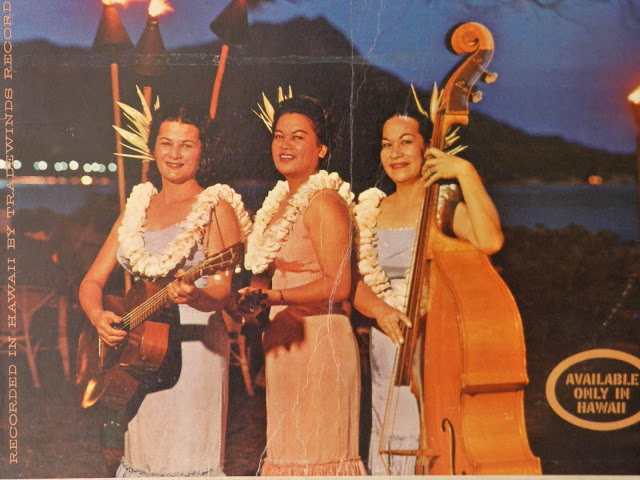