Original Post, June 2011:
The Irregulars might have been the bad kids in town that WLAN wouldn't play.  I can't find anything about Largo Records or the band except they had a really trippy sound for little-old Lancaster. If the date is correct they were pretty happenin' with that first big wave of psychedelic music. It Don't Mean Nothin' comes complete with space sounds, and their nearly 5-minute version of Bo Diddley's I'm A Man is just bananas.

Thanks to Spin the Groove and The Rock and Roll Cellar for hipping me.

Addendum from the Depths, September 2011:
Man, this band barely escaped deep analog obscurity.   The tracks survived, thanks to a single and couple of compilations and blog posts, but there was nothing else to go on until Steve of The Baker Street Irregulars happened upon this Tapewrecks post and answered a few questions about the band and the mid-60s Lancaster music scene: 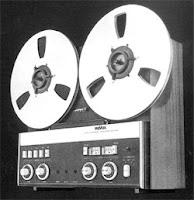 [Jim did, in fact, move to Maine, where he is active as a church leader.]

Thanks to Steve for sharing his memories!
If you remember The Baker Street Irregulars, the Hullabaloo, or any of the happenin' Lancaster music scene from those days, please help salvage the history! 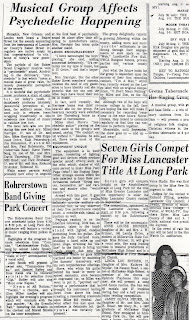 The sister of the late Miles Harriger graciously sent in the band photo added above and a great article about the band that really describes their live show and reveals much about the Lancaster music scene in 1966.


Musical Group Affects Psychedelic Happening
"Memphis, New Orleans and London each boast of a Baker Street but the sounds emanating from the instruments of Lancaster County's Baker Street Irregulars are native solely to that ungeographical 'in city,' home of today's 'now generation.'...
While many parents would probably turn away in anguish at the first beat of psychedelic sound let alone allow their offspring to manufacture same, Mrs Harriger has taken quite another stand.
"I have encouraged the boys' playing," she said, adding somewhat defensively, "It's certainly not my type of music, but it IS theirs," and that's important. ...
Miles cites Steve's "psychedelic guitar" playing as the chief asset to the group's new sound, saying "We couldn't exist without it," Besides, he added, Steve owns most of the equipment.
The equipment is in itself unique, consisting of lighting gear and devices which produce special sound effects such as the echo which, shades of old, once served to make Miss Patti Page (who?) the Singing Rage. Other strange sounds which the lads interject to hypo their performances include "flying saucer, locomotive, jet" and various and sundry other "weird sounds."
Armed with this gear, it goes unchallenged that the youths definitely provide auditory stimulation but, as any observer of their live performance could attest, a considerable visual attraction as well.
Perhaps cashing in on the Liberace following, Dick has, on occasion, taken to the bandstand with lighted candles stemming from his guitar. Jim goes the Judy Garland route, wielding a hand mike up and down stage, straining his 'lifeline' to the limits to bring his vocals smack dab onto the dancefloor where he goes Miss Garland one better by matching the dancers' maneuvers with his own terpsichorean offerings.
Steve, who whips his guitar behind his head in more inspired moments, once became so engrossed (or as Miles was wont to put it, "psyched out") during a performance that he brought the intrument down from above his head, creating a resounding crescendo upon Miles $50 cymbal. Just what effect this had upon the audience is debatable but the cymbal was certainly 'impressed.'
The group delightedly reports a growing following within the county, adding more and more "psyche' enthusiasts to the throng through their engagements at such spots as the "Web," Landisville Fire Hall, YWCA Hangout dances, private parties and various county pools.
Just what the future holds for the group is dependent upon the success of their first recording venture, "I'm A Man," which was recently waxed on the Largo label with an original composition, "It Don't Mean Nothing" by Miles and Jim, on the flip side.
Although two of the boys will enter college in the fall, they are hoping the disc will make it necessary for recording 'reunions' in the near future. Nevertheless, they intend to commute regularly so that they can continue to perform together.
Meanwhile, until September, the show goes on -- and up -- and away!