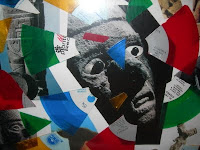 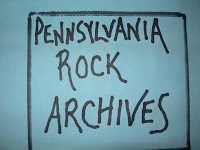 My search for hometown wreckage brought me to the mysterious Frog and Rabbit Records from Dellville, PA (pop. 8,703).  They reissued 45s in tiny runs of some pretty whacked-out Pennsylvania psychedelic recordings from the 60s and 70s.  Some are Frog records, and some are Rabbit records.  I haven't figured out the band/species relationship.  Nor am I sure who the humans are behind the label, although there is significant evidence pointing toward Billy Synth from the Turnups and the curator of Psychedelic Unknowns series (It's all out of the Harrisburg area, cut and paste artwork, Billy and the Star Jets, and there are only a few people as steeped in twisted, rare psych as Billy).  But this has yet to be confirmed or denied.   For now the label seems to only exist as a ReverbNation page "We're just here posting past Penna rock for the ages...." was the only reply I got, but thanks for the salvage operation!


I'm telling you, you have never, ever been kissed
'Till you've gazed into polka dotted eyes

The Snaps from the Philly area have a song catchy enough to make WFILs 1966 top-ten but I never heard it until now.  I love the hair-flipping beat and the faintly Captain Beefhearty timbre of the singer's voice.  Creation's Disciple put out two really unusual sounding sides with interesting bass lines.  The double-timed Psychedelic Retraction has a fabulous title, but the lyrics are pretty standard, rabidly girl-hating 60s punk fare, made up for on the flip side with the longing I'll Remember and just the sweetest little guitar break.   Ognir and the Night People gives us a prototypical punker done really, really well.  Then Frog and Rabbit hop right on into the 70s with a lot of bad acid psych and prog rock, but The Reflection stands out among the rest. I'd be curious to know the date on this record.  Sounds like either they were channeling The Stooges I'm Sick of You, or Ron Asheton caught a show by the Lebanon Community Theatre at some point prior to 1973. 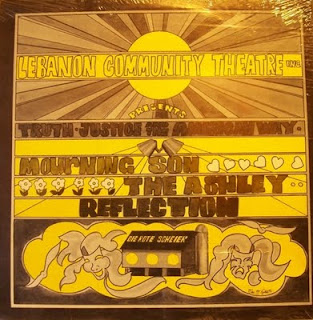 
*I'll Remember downloaded from Spin the Groove
Posted by tomsun at 11:32 AM