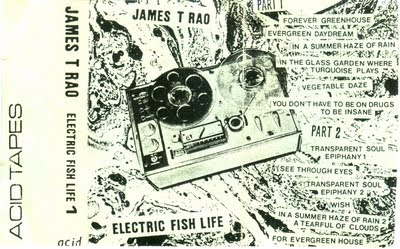 If you search "James T. Rao" on the Internet you'll find a chemistry professor in Hyderabad, India, and a few cassettes on a Wiltshire, UK tape label by some inexplicable citizen of Connecticut, USA. We are concerned with the latter James T. Rao.  He's been recording songs in his bedroom since at least the mid-80s and, despite remaining almost completely unknown, somehow got hooked up with Acid Tapes in the UK and put out a half dozen albums on cassette.  More recently he's shown up as Jim Rao and Orange Cake Mix, but he's remained reclusive despite releasing a steady stream of music.

Microcosmic Rule #2 - Sing about your vegetable garden a lot (but stop short of gnomes). 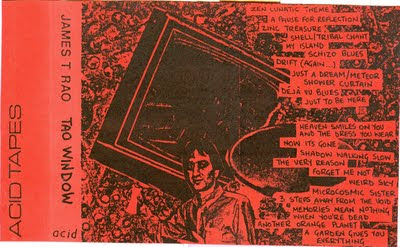 This is where I just deleted several lines referencing other well-known artists of the past, but the list started getting long and pompous, so let's just say you might find some obvious comparisons here. Enjoy them! Rao's songs might sound somewhat derivative at times, but in such an unassuming way, that you can hardly gripe about it. Each cassette has common threads that run through the tracks that transform them into cohesive albums; not just collections of songs.

Microcosmic Rule #3 - Wear out the knobs on your tape recorder by interstellar overdriving the tracks back and forth. 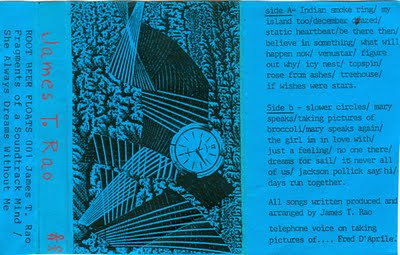 Okay, so that was a reference. I couldn't help myself.  Wearing headphones while listening to a James T. Rao tape makes you dizzy.  There are nice trancey numbers with collaged song fragments, overdubbed random spoken words, and sound effects. Those pre-digital sloppy tape cuts between songs and sounds may have been accidental at the time, but have become an elemental effect of the 80s home recording underground. The last tape is two albums in one, put out by Root Beer Floats as their first (and possibly last for all I can tell) release. It came on a recycled cassette with a few super pop songs that that jump right up into your face out of all the reverby, psychological veggie soup.

Microcosmic Rule #4 - There are no rules in the Microcosmos of James T. Rao.

Thanks to Rustle Noonetwisting for lending me these tapes.
Posted by tomsun at 5:59 PM