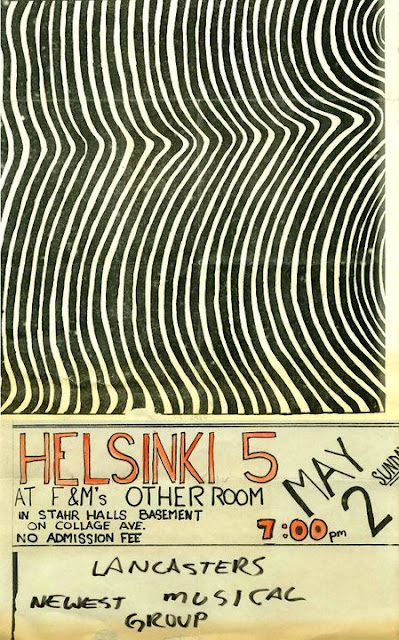 
For years,  I made the case (albeit only in rambling discussions with myself) that The Real Gone were the first 1980's underground punk/garage band in Lancaster to write and perform primarily original material, and therefore should be credited with starting the true underground Lancaster music scene of the 1980's. The Bodies didn't really count because they were largely a cover band, but let's give them an honorable mention.  The Sharks and other Village New Wavers (besides being a bad joke as far as I was concerned) were just part of the Pennsylvania Musician cover band scene, except they did U2 covers rather than Molly Hatchet covers.

However, when you asked about the Bodies a few weeks ago, I got curious, searched around and found out about a band called the Helsinki 5 and some F&M-based bands from 82-83 that involved a fellow named Ted Adams, some other F&M and Lancaster people, including a future Pavement member[Mark Ibold], and ...our pal Paul Barros! [proprietor of Alexia Books]        -Rustle Noonetwisting 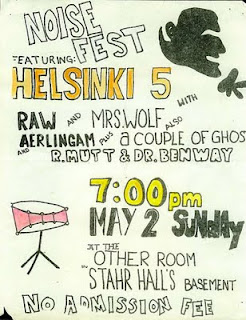 May 2, 1982 was a relatively strange Sunday in Lancaster, PA.


Al Boyd: The Noise Fest, I recall, was held at F & M in Spring of 1982. I'm not sure how we got invited to play there, but I think it had something to do with knowing Pancho and Ted, who were F & M guys that happened across us and liked our "music." It was a bizarre evening and I remember that this may have been our first show in front of an actual audience. We brought a significant amount of jelly beans and ended up eating them as well as tossing them at the audience. That was a smart thing to do (not), but I guess part of our shitty teenage attitude at the time, from having listened to the Pistols, the Clash, Black Flag, and the Dead Kennedy's with a bit too much frequency.

I think our set lasted no more than thirty minutes...at that time we may have only had six or eight "songs", which consisted of 1. turn on the drum machine, 2. pick a beat, 3. act like you're playing guitar and bass, 4. sing/talk the vocals. I recall being applauded...I guess the audience didn't know any better. 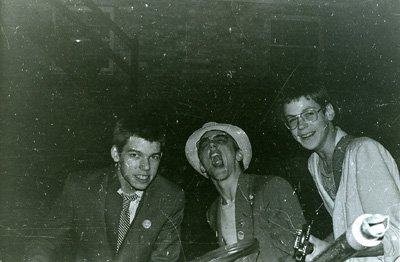 
Joe Wood: There was one problem, none of the three had any musical background, save the odd piano lesson when we may have been eight years old. What Bill, Al and Joe were able to put together was a clashing cacophony of noise, which prompted Joe's mother to comment that "it sounded like music coming from the frozen tundra."

...the name "Helsinki Minus Five Below Zero" was suggested by Bob Yocum. He had thought of the name while reading world weather reports from a teletype machine. Helsinki -5° was born.

The May 2nd show features H5 at their rawest moment...as the three band members present the music in a disjointed cacophony of clashing music. This tends to happen with you have three musicians all trying to lead, not listening to each other, and playing what is best described as three different songs at the same time.


Do the Todd
About F.A.C.E. (Lies)
Vinyl Graveyard 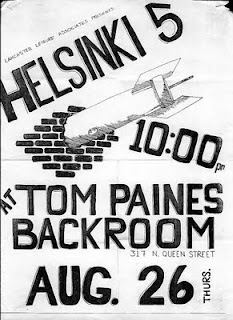 Al Boyd:  I think we kind of came in to our own when we played a show at Tom Paine's Back Room some time later.... Our Gang of Four influence was really on display, and that's the musical direction that I had always envisioned, since we were all pretty versed in the injustices of the world at that point and had a healthy disrespect for our government.  I think that was my last show and Bill and Joe carried on the group in some form or another when Joe moved to Philly and attended Penn University.

Joe Wood: Helsinki 5's third and final live performance took place on October 30, 1982 at Tom Paine's as the opening act for Philadelphia's The Impossible Years.  Bill came down with a severe cold and was unable to appear on stage. This led to the temporary addition of Bob Yocum on bass and Pancho on guitar, with Joe filling in on lead vocals. Bob and Pancho's musical abilities proved to show that Helsinki Five's melodies actually had potential. Especially since Bob and Pancho musically played with each other as opposed to H5's normal practice of playing against each other.

Computer Failure
Liverpool is Just as Cool (If London Drowns)


Paul Barros: We began, if I remember right, by spray-painting three t-shirts, each with an individual letter to spell out RAW, which we'd wear when we played (if we changed positions, we could also spell WAR - but of course, that name had already been taken).

I know that for Noise Fest we prepared some backing tapes that we were going to play along with for some of the songs. Some technical problems kept the tapes from being audible to the audience or us. Ted played drums and guitar, Pancho played guitar, I did what I could with some individual drums, clarinet and assorted percussion things (maybe even harmonica). At some point, Pete King and Bob Yocum joined us for a couple of songs. The event itself was great. Helsinki 5 were especially good. Pete King, Bob Yocum (who'd both played together in 1.3) were involved in Aerlingam, R. Mutt and Dr. Benway. Dave McKinney (who had played bass in 1.3) was also involved in one or the other of these two bands. One of them played behind a canvas on which was projected a film....


After RAW, Ted and I were in a band called OSS (also included Josh Roberts, Bob Yocum, Tim Finefrock)...

Ted Adams: These "bands" were in large part an excuse to do some underage drinking and make noise. Some of the musicianship is rather poor because we took turns on instruments we didn't know how to play.

If you were around Lancaster in those days and remember the bands, clubs, music stores, record labels, or any other part of the scene, please help us salvage that history!
Posted by tomsun at 1:04 AM