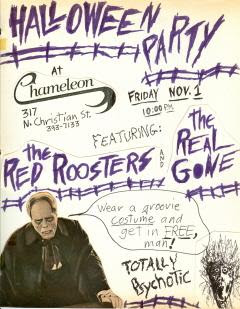 The Red Roosters were Lancaster's rockabilly revampers featuring saxophonist Lars Espensen who went from the US Marine Corps, to the Roosters, to playing with the fabulous A-Bones.  He's the only Rooster I knew, but he wasn't the main singer, and I remember the bulk of their songs being pretty clean-cut rockabilly with some Johnny Cash here and there. They were the opening act for the historic Hasil Adkins show at the Moose Lodge right after he was rediscovered by Norton Records et al. The two songs I have on tape are from the Punk's Not Dead show on WFNM.  Lars and and local punk goofballs Jack Lord's Hair were in the studio offending the morals of a few Lancastrians that evening. Unfortunately, that's all I have on The Red Roosters, so if you have any wreckage to share, please chicken-walk it over our way! 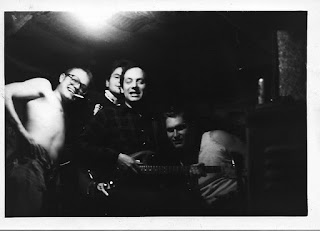 Thanks to Sophy DiPinto for her photos!

Lars went on to playing honky tonk in Brooklyn with The Gowanus Canal Boys and is currently in Tuscaloosa with The Original Snake Charmers.
Posted by tomsun at 4:51 PM