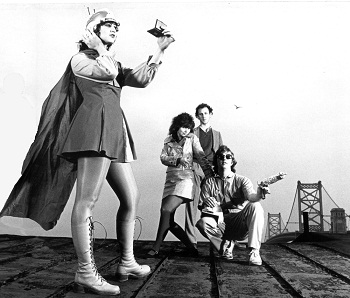 [pronounced: rootahs] When the 70s and the 80s collided in mid-air.  Reesa and the Rooters came walking out of the wreckage in primary colors.


In 1978, my younger brother, Larry Laskey, and I would often jam on acoustic guitars to create moody songs with lyrics inspired by the news. When friends Bob Jay and Donny Buckley joined on electric guitar and bass, I booked us in a South Jersey tavern as Reesa and the Rooters, a blues-pop, semi-acoustic group.

We added a drummer and continued to gig around Philadelphia and Jersey. I hand-lettered and cut and pasted graphics on all our literature, as well as putting up hundreds of posters and sending out mailing list postcards.

After Larry switched to electric guitar and I started playing a Farfisa organ, the local media dubbed me “the queen of the new wave scene.” Cherie Rumbol, a cohort who played in South Jersey club bands, came in to replace the original bass player and to add another voice to the mix.

The band and its music fit perfectly into the blossoming new wave scene in 1979. Except for some suburban clubs where people just didn’t get it, our audiences dressed up with skinny ties or spiked hair and came ready to pogo or slam dance.

In October 1980, a new version of the mythological jerk appeared on the Rooters’ first and only record release, Ultraman in Surf Villa, 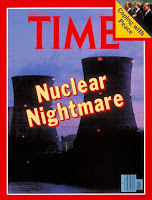 backed by the punk-rock anthem TMI. I was always a natural on stage, but it was my natural knack for promoting that helped push the single into a college radio hit.... You make me cold like TMI... Melt my heart like TMI....

[I was 10-years old when TMI had its little accident and our moms packed my cousins and us in the car and headed for the hills. We stayed in a cabin in the Poconos and picked blueberries that week. 30 years later it's great to find a love song based on a TMI simile!]


My performances were a reflection of my hippie past that included running offstage into the crowd, as well as tumbling around while singing and playing organ or guitar, or checking my makeup in a compact mirror.

Cherie exuded a quieter, more demure sexiness as she sang lead on such songs as “Ultraman in Surf Villa” and “Pierre.” The latter was Larry's vision of Marie Curie, whose husband discovered radium.

After nearly three years with the Rooters, and frequent artistic differences between me and my brother, I started writing songs on my own. “Guru Eye,” based on an article about Mao Tse-tung’s wife, was the first original tune we performed that had been written sans Larry.

That summer, Cherie and I jammed in Philly with drummer Ann Frances at an outdoor concert. We clicked immediately, and decided to put together Suburban Wives Club as a Rooter side project. But almost as quickly, the Rooters broke up. 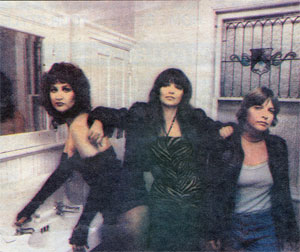 SWC performed some of the Rooters songs, although in a more minimalist fashion. I set aside the Farfisa and concentrated on guitar to record Guru Eye as our quick-and-dirty single, b/w Casual Cat at a Laundromat.  Since we were a trio, I couldn't go out into the crowd much but I still did crazy stage routines, even getting Cherie involved in musical calisthenics during "Fat Thighs."  -from Reesa Marchetti's website.

Thanks to Billy Synth for telling me about The Rooters!