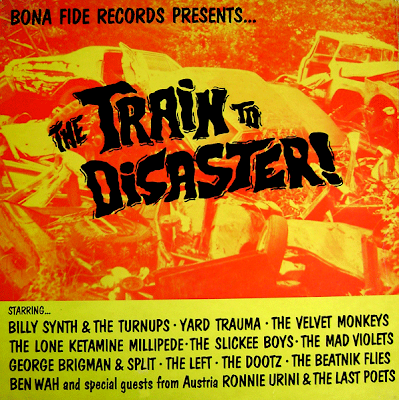 
Hi Folks! There's a new sound rising up angry in the sky. There's new voices crying they're not afraid to try! These bands won't shut up and won't be ignored. They believe in music--but not the type that James Watt likes. The music is loud, harsh, and maybe even crude. But it's real! here are 13 mirrors of reality--worlds that most people would rather not acknowledge. The world is not all jelly beans, Ivory soap, and two car garages. Neither is this record!

This is one of those weird records that comes out of some guy's mid-state living room with the back stock sitting next to the TV set in boxes ready to mail out to the rest of the fanzine-reading world. Rick Noll tells the story best on the Bona Fide Records blog:


Hey, does anybody remember the early 80s?? I sure do. Fresh from my success as a bargain bin diver which got me into selling old vinyl, I soon turned to local PA garage bands, and influenced by Nuggets, Pebbles, and my pal Billy Synth's Psychedelic Unknown comps, I got the brainy idea to start a little label that would send some light on deserving local bands. Bona Fide Records was born and in 1982 our first LP, a 60s comp, The Return of the Young Pennsylvanians was released. Although mostly unknown at the time, now bands like the Centurys, Loose Enz, Shaynes and the Flowerz are known to garage collectors around the world. Even though I was a heavy collector, the modern scene also intrigued me and I was a fan of the many punk, new wave, garage and experimental bands of the time. Especially I was impressed by the Harrisburg scene in which Billy Synth and the Turnups deservedly reigned as kings--though they weren't always treated as such. Billy and his pals the Turnups released their own swell records on the band's Cracked Records and I was hooked!

I was also impressed by the growing DC scene and in particular the sonic mayhem of the Slickee Boys with their psychedelic outfits and their frantic adrenaline filled live shows. So I got another brainy idea! Why not put out a comp of current bands who could actually benefit from such a release? So "The Train to Disaster" was hatched and naturally I asked my pals Billy and Kim Kane of the Slickees for help....

Normally, I'd just post my favorites, and I surely like some more than others here, but what I really love about Train to Disaster is the disjointedness: mostly 80s, one 70s, one from Austria, mostly guitars, some synthesizer, a few drum machines, amateur psych, but not all retro -- that you can only get from the whole record. So here it is!

The Dootz
Return of the Young Pennsylvanians
James Watt
The Deadly Spawn
Posted by tomsun at 3:11 PM