Weirdest Record Ever Bought at the Mall.... ...White Noise... An Electric Storm...

If it wasn't for the Vietnam War, and the fact that I was at the Naval Air Station hospital in Albany, Georgia, USA being born in 1969, I'm sure I would have been thrilled by the release of An Electric Storm by White Noise in London, England, UK.

I'm not always too keen new wave or electronica, but there are a few roots of these genres in the pre-Moogy past that are pretty spectacular. This one is a real timepiece with the tape-looping innovation of Delia Derbyshire, the co-creator of the Dr. Who theme. 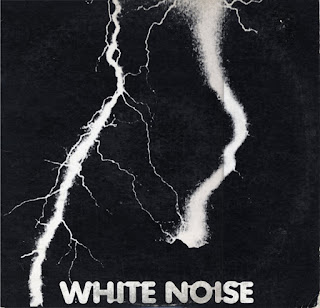 Phase-In:
Love Without Sound
My Game of Loving
Here Come the Fleas
Firebird
Your Hidden Dreams

Phase-Out:
The Visitation
Black Mass: An Electric Storm in Hell


When I was growing up in Lancaster, Pennsylvania, USA, there was an ice skating rink in the basement of the Park City Mall. I never skated there, but I have strong memories of watching skaters from above through a window in the floor.

By the time I was a teenage mallrat, the rink was replaced with a grubby flea market with little redeeming value except for a little stand called The Record Connection run by a nice guy named Andy. I probably bought a few dozen records from him, but the most unusual was this White Noise album, which I picked up purely because of the cover art.

Counted among the classics by electronica lovers, I just loved the weirdness, and the multi-tracked sex noises were the next best thing to what most adolescent boys were hanging out at the mall for anyway. I got lucky.
...

Read more about White Noise on {feuilleton} and Pitchfork.
Delia Derbyshire - Sculptress of Sound - BBC Radio documentary
The Record Connection is alive and well in a storefront in Ephrata!
And visit 1970's Park City Mall at Malls of America blog!
Posted by tomsun at 10:30 PM