I don't know much about this band except they were right next door in York, PA while I was still listening to my mom's Abba 8-tracks in Lancaster. I might well have seen them at the Super Sunday Family Event. 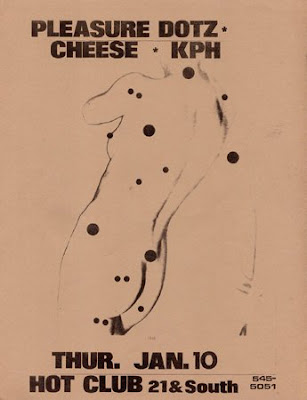 
YORK - For more than a hundred years. the York community has been known for its musical groups and national magazines that refer to York as Musictown, USA. A new music group in York, the Pleasure Dotz, could very well earn more musical recognition for the community and possibly propel the three musicians who make up the group to International stardom.

Scott Tattar, better known as "Scott Dot," is spokesman for the Pleasure Dotz. It's a group that provides, according to Tattar, "urgent music for the modern consumer." Since forming a year ago, the Pleasure Dotz have "made waves'' in a new type of music some call "New Wave."

"We're not 'New Wave' musicians," Tatter says. "If we had to give our music a name we might call it 'punch rock,' music with titles such as 'Change the Channel,' 'TV Dinner,' and 'Breaker Twins,' a favorite Pleasure Dotz number about test tube babies.

Tattar and other members of the band, Edy Van and Al Loy (both stage names), met while Tatter and Van were students at York College. Tattar, originally from Philadelphia, plays the drums for the group. Van, from Bethlehem, is an insurance salesman who plays bass and guitar. Loy, a nurse when not a musician, comes from Harrisburg.

The group's future was significantly brightened early last month when a South Philadelphia recording company cut a "demo" for them. The group hopes to have a 45 rpm recording in national circulation by fall of this year. The group's members, who derive their lyrics from "realistic, contemporary issues," expect to move to Philadelphia this summer to be nearer the music "main line."

They've already played Philadelphia's famous "Hot Club," and they are scheduled to make a personal appearance locally on Sunday, May 25 at the Memorial Day Super Sunday event being held at the York Airport Park, says Tattar.

Local music lovers can hear the Pleasure Dotz do its special brand of "up-and-in rock'n'roll of the future" during the Super Sunday family event.

Pleasure Dotz reunited in 2011 to play a show with Reesa & the Rooters, so they couldn't be too far off. Maybe we'll hear that demo on these pages with any luck.

Thanks to Reesa's Relive the 80s website for the pleasure of these dotz.