There were a few isolated outbreaks of punk rock in late-70s central Pennsylvania mostly around Harrisburg: Billy Synth & the Janitors, The Turn-Ups, The Abjects, and The Late Teens. By the early 80's, Lancaster had a few offerings with RAW, Helsinki 5, and The Bodies. Scanner was from York and Gettysburg on other side of the Susquehanna, that had more of a connection via the I-83 axis to the Harrisburg/Baltimore/DC scenes, or what there was of them at that point, than anything happening to their east in Philly or NYC. And they had two bass players!

Live in Abbottstown, 1981
It's a War
Out of School
What Love Is 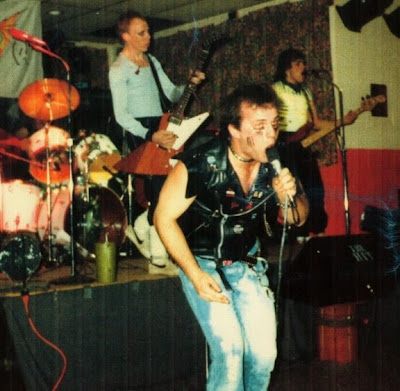 Scanner was formed by me and Junnie Fortney  after playing with various lineups during 1977-78. Later, we had Frank playing a second bass, and Reed on rhythm guitar for a short time. We went through a couple of name changes before settling on Scanner in 1981, when the movie “Scanners” came out. I liked the imagery of heads exploding, and imagined it being the effect of hearing Scanner music!

Playing punk rock in Central PA during the 70s and early 80s was a risky venture. When playing out, we often had stuff thrown at us, and we were simply shut down by some clubs. We played covers of punk bands, such as The Dead Boys, Ramones, Sex Pistols, Buzzcocks, Circle Jerks, etc. Additionally, by the end of 1979, the band had a handful of original tunes thrown in, and we were slowly changing over our playlist to consist of about 75 percent original punk tunes.

Scanner reunited in 2012, and released an album: One Foot in the Grave, and More Pissed Than Ever,
available here: www.scanner1979.com
Scanner Facebook page: www.facebook.com/Scanner1979
Posted by tomsun at 9:27 AM