This terrific Reg Kehoe & his Marimba Queens Soundie has been making the rounds on the web for some time, but I didn't know they were from Lancaster until recently: some royal musical heritage for the home town.

I should be hammered with rubber mallets for citing Wikipedia in my research, but this is really interesting and the most complete info I can find about the band and the film, so here you go:

The lasting legacy of Reg Kehoe and his Marimba Queens is in "A Study In Brown", a two-minute black-and-white film made in early 1940. One of hundreds of "Soundie" films, they were printed backwards (mirror image) so they could appear correct when played in a Panoram machine (an early film jukebox about the size of a refrigerator) which employed a series of mirrors to reflect an image from a projector onto a 27-inch, reverse-projection, etched-glass screen in the tight, enclosed cabinet. The popular machines were first produced in 1939 by the Mills Novelty Company of Chicago, Illinois (which also made art-deco, fancy slot machines), and found their way into countless soda shops, taverns, bus and train stations and other public places across the nation. The specially made 16 mm films ran in a continuous loop and stopped when an in-line metal strip passed a sensor. The patron then put another nickel (or dime) in the machine to run the series of four to six 2- to 3-minute films again. The Panoram mechanics were housed in art-deco, high-quality wood cabinets and played Soundies, 8- to 12-minute films that typically showed jazz and other musicians of the day, as well as dance troupes and other acts.

Most viewers notice the sound is not necessarily synched to the video; this is because when making Soundies, the artist first recorded an acceptable copy of the audio, then various camera takes were made using different camera angles and closeups as the performers lip-synched the lyrics and acted as if they were playing the instruments. The results were edited to create the appearance of several cameras doing the filming, when in most cases only one camera was used.

With the beginning of World War II, production of the Soundies and Panoram machines was drastically reduced due to a wartime raw material shortage and the Mills Panoram's 1940 success quickly faded.

"A Study In Brown" was also shown in movie houses as a bonus before the main feature. Reg Kehoe and His Marimba Queens played from about 1938 to 1955 and was a hugely popular act, starting and ending each yearly tour with appearances at Hersheypark in Hershey, Pennsylvania. In between, the troupe played up and down the East Coast and throughout the Midwest, traveling by bus ala the Big Bands and making the rounds of all the major dance halls—including in Chicago The Aragon, Willowbrook (Oh Henry Ballroom), Melody Mill, Midway Gardens and Trianon.

Stealing the show in "A Study In Brown" was 'hep-cat' bass player Frank DeNunzio, Sr., of Hershey, Pennsylvania, who played his standup–slap bass almost until his death in February 2005. The woman playing the marimba next to the maraca player, Grace Bailey, in the film is Reg's wife, Fern Marie, who died in July 2006. On the back marimba is Joyce Shaw on the upper, Ruth Hauser on the middle octave, and Janet Yonder on the lower. On the side marimba, Madee Greer is on the upper and Polly Weiser on the lower.

No other Panoram recordings made by Reg Kehoe and his Marimba Queens are known to exist. However, thanks to their two-minute "soundie", the legacy of the Marimba Queens lives on. The band played its last engagement at the Bedford Springs Hotel, Bedford, Pennsylvania in 1962.

A Study In Brown (audio)

Thanks to Cyndy Yoder Henry, daughter of Marimba Queen Madee Greer, for the photo above. I didn't know they were a Lancaster act until this photo turned up on the Bands of Central PA site right above these guys: 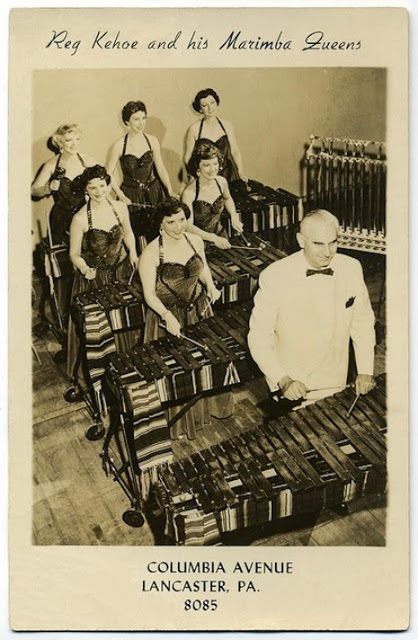