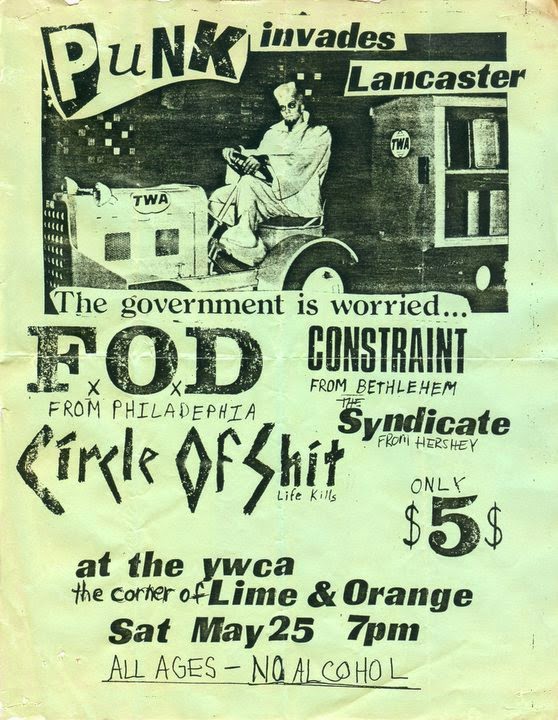 Editor, New Era: Lancaster is about to be invaded! The enclosed poster was found taped to one of the trash containers in Downtown Lancaster announcing a punk rock "invasion" which will convene, of all places, in the YWCA, the Young Women's Christian Association. As a Christian, it seems to me highly incongruous for such a group to be allowed to offer their obscene and filthy entertainment in a place which historically has been known as "Christian."
... The four-letter work on the poster should be enough of a clue to their message! Their intentions are clear -- "Punk rock invades Lancaster." My Webster's dictionary defines "invade" as "To enter for conquest or plunder; to infringe or encroach on; to spread over injuriously and progressively as gangrene invades healthy tissue." Is this what we want for Lancaster? ... I for one deplore this "punk" appearance in the Lancaster YWCA and raise my voice in opposition to it in the name of decency. --a Christian


Circle Of Shit - The Punks Are Out Tonight 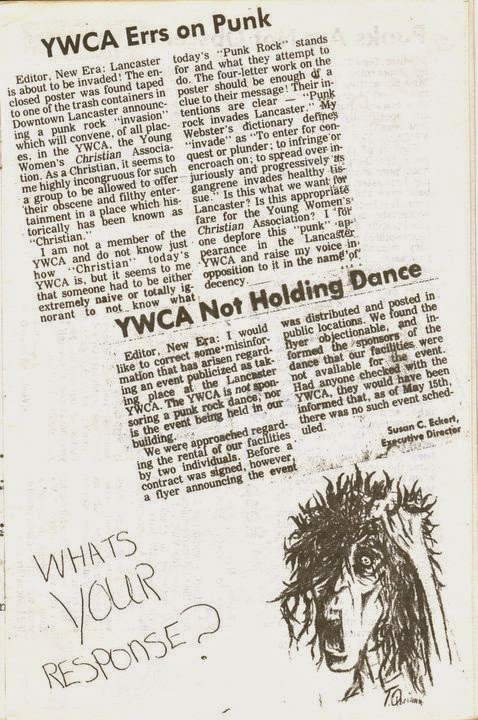 Editor, New Era: I would like to correct some misinformation.... The YWCA is not sponsoring a punk rock dance.... We were approached regarding the rental of our facilities.... Before a contract was signed, however, a flyer announcing the event was distributed and posted in public locations. We found the flyer objectionable, and informed the sponsors that our facilities were not available.... --Susan C. Eckert, Executive Director

Editor, New Era: I am writing concerning the letter written by a "Christian," and that person's attitude toward Punk Rock music.... 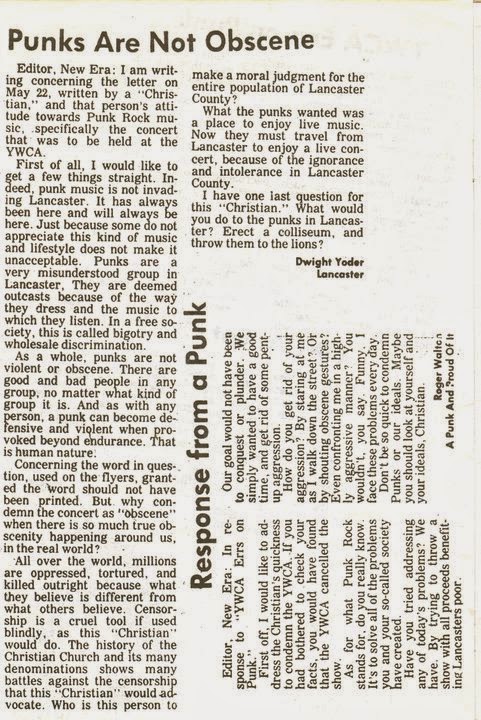 ... Punk music is not invading Lancaster. It has always been here and will always be here. Just because some do not appreciate this kind of music and lifestyle does not make it unnacceptable. Punks are a very misunderstood group in Lancaster. They are deemed outcasts because of the way they dress and the music to which they listen. In a free society, this is called bigotry and wholesale discrimination.
As a whole, punks are not violent or obscene. There are good and bad people in any group.... Concerning the word in question, used on the flyers, granted the word should not have been printed. But why condemn the concert as "obscene" when there it so much true obscenity happening around us in the real world.
All over the world, millions are oppressed, tortured, and killed outright because what they believe is different from what others believe. Censorship is a cruel tool if used blindly, as this "Christian" would do. The history of the Christian Church shows many battles against censorship....
What the punks wanted was a place to enjoy live music. Now they must travel to enjoy a live concert because of the ignorance and intolerance in Lancaster County.
I have one last question for this "Christian." What would you do to the punks in Lancaster? Erect a colosseum and throw them to the lions? --Dwight Yoder, Lancaster 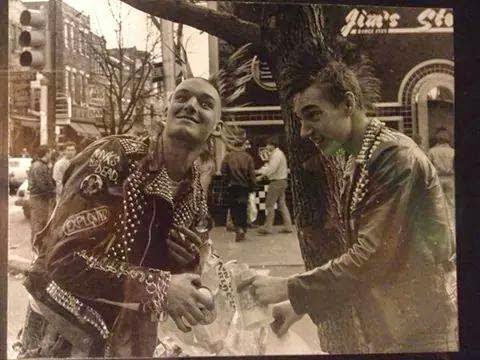 Editor, New Era: ... As for what Punk Rock stands for, do you really know? It's to solve all of the problems you and your so-called society have created.
Have you tried addressing any of today's problems? We have. By trying to throw a show with all proceeds benefiting Lancaster's poor.
Our goal would not have been conquest or plunder. We simply wanted to have a good time, and get rid of some pent up aggression. How do you get rid of your aggression? ...
Don't be so quick to condemn Punks or our ideals. Maybe you should take a look at yourself and your ideals, Christian. --Roger Walton, A Punk And Proud Of It


In memory of John Brubaker, who passed away this week. He was a native of Lancaster County, and the singer of Circle Of Shit.

Letters to the editor of the Lancaster New Era reprinted by Death Frisbee
Circle Of Shit Black Thoughts demo available on the Internet Archive
Circle of Shit page
Posted by tomsun at 1:31 AM