A Date with the Velvet Monkeys

Everything Is Right
(1981 Cassette) 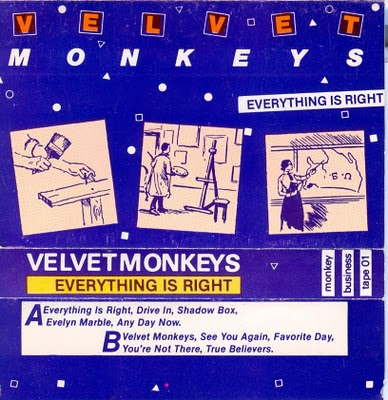 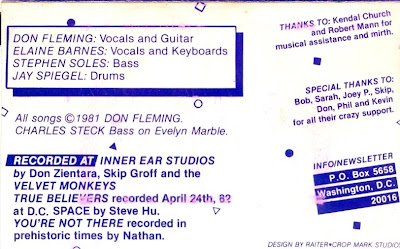 I had this very tape playing as moood music for an almost semi-romantic moment when my machine gobbled it during my favorite song. We spent the rest of the date trying to unwrap about 30 seconds of Any Day Now from around the capstan and talking about US intervention in El Salvador. It was really hot.


Some of the songs on the cassette were rerecorded on the slightly more polished and reverby Future LP in 1984. Parts of both were re-released by Shimmy-Disc in 1988 as Rotting Corpse au-Go-Go. I posted here the grittier cassette versions, commercial breaks, and the fragments of live songs that were left off the Shimmy LP. Despite the chewed up part, this version of Any Day Now has the best vibrato keyboard ever (but if someone out there could rip an uncrumpled copy for me I'd be very grateful).


August 2011 addendum: New Wreckage Recovered!
Don Fleming remastered Everything is Right through Instant Mayhem Productions.  It's now on CD on Thick Syrup Records and downloadable here. The whole album is really worth checking out. There are some additional live tracks and a super cool cover of The Ventures' The Creeper with drum machine!

More Monkeys on The Train to Disaster and Deadly Spawn comps, and the Colors single.

Don Fleming is currently the executive director of the Association for Cultural Equity, and is leading the digitization project of Alan Lomax's Sound Recordings.
Posted by tomsun at 11:27 PM