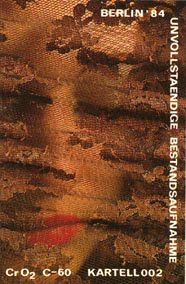 My friend George picked up this compilation tape during our college year in Rome: Sleep? West Berlin 1984. Aus 7 Landern der Welt was a staple of my mixtapes for years, until I lost the tape. Apparently the work of Alexander Hacke of Einsturzende Neubauten, my limited threshold for dreary industrial music had me reaching for the ffwd button, but when the fiddly, friendly Three Suns guitar and xylophone kicked in behind the scraping metal and vacuum pumps I got happy again. Twenty years later it reminds me of the frenetic clunks, thuds, and music of imaginary play that emanate from my 6 and 9 year old daughters' bedroom when they get going. Are they enjoying themselves or killing each other?

The entire tape can be downloaded here.
Posted by tomsun at 5:54 PM