In 1968, as the eyes of the world focused on Mexico City in anticipation of the summer Olympics just weeks away, students marched peacefully calling for democracy and revolution. Thousands had been arrested. By October the 2nd, some ten thousand crowded the Plaza de Tres Culturas in Tlatelolco, surrounded by police and army and helicopters and tanks. Shots were heard, fired by government agitators at the troops to justify the suppression of the protests. Troops opened fire on the crowds and rampaged through the night. By dawn dozens or hundreds were dead. By noon, the plaza was scrubbed clean and the Olympics started on schedule a few days later. 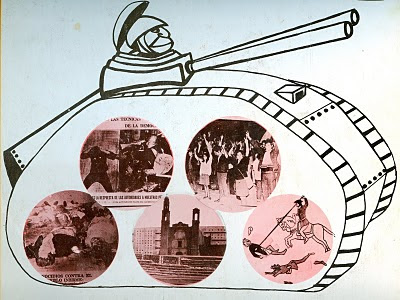 I know very little about this record. Just that it was performed and recorded in 1979 by Teatro Mascarones de Cuernavaca to keep the memory of the massacre alive. I picked it up at a garage sale in San Francisco in the mid-90's, only vaguely familiar with the events of 1968. The musical pieces included here are in the nueva cancion folk, protest style. The first two are sung by members of Teatro Mascarones and the last one is by Angel Parra, of the first-family of Chilean nueva cancion. The performance picks up the continuum of oppression from the Spanish Conquest, to Mexico 1968, to the ongoing suppression of the truth by the ruling PRI party, which remained in power until 2001.
Para que nunca se olviden

So you never forget
the glorious Olympics,
the government ordered the killing
of four-hundred comrades....

...But these spots will not wash with soap, nor with water....

More info here: Mexico '68: A Movement, A Massacre, and the 40-Year Search for Truth - Radio Diaries
Massacre in Mexico by Elena Poniatowska
And here: Al Jazeera