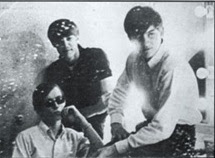 ¡¡¡When I posted the Crude PA comps and read that The Creations' 1965 cover of Love is Tuff was by Pittsburgh's Fantastic Dee-Jays who changed their name to The Swamp Rats in 1966, it didn't occur to me that that sedate tune would be by THE Swamp Rats who did the absolutely psycho version of The Sonics' Psycho featured on the first Back from the Grave compilation that inspired my love of obscure garage bands back around 1984!!!

Yep, that's them. And that's not all. They managed to do violence to a whole set of the best rock and roll tunes out there, most of them familiar covers but with a few obscurities I remember from the garage revival of the 80's.

Love Is Tuff is one of their few originals by the early bassless trio, The Fantastic Dee-Jays. Fight Fire is by The Golliwogs before they went and changed their name to Creedence Clearwater Revival (what were they thinking?).

The Swamp Rats added a bassist and a heavy dose of nastiness to The Sparkles' No Friend of Mine. The Kinks' 'Till the End of the Day has a particularly mean sound too, like it was played with bass chords or a seriously down-tuned guitar. And She's Got Everything, which may prove mathematically to be the best pop song ever (more about that later), sounds like it was sung with gobstopper in mouth. Hey Joe is just hilariously frantic and had me dancing around the kitchen. The beautiful original I'm Going Home is followed up by what may be their most protopunk song of all, another original worthy of Stooges worship, Hey Freak. Last of all is a song I usually can't stand because it's been so overdone. But this might be the best massacre of Louie Louie ever. That screeeammm after the guitar solo shreds my ears, and warms my heart.

By 1967 they were history, but not before setting a standard for the likes of The Chesterfield Kings, The Fuzztones, and their hometown fellows The Cynics in the 80's when these songs all came back faster and fuzzier. 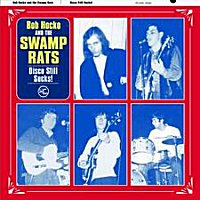 The Swamp Rats 2003 reissue
on Get Hip Records

Email ThisBlogThis!Share to TwitterShare to FacebookShare to Pinterest
Labels: 1960s, 2011 posts, garage, I can't believe I never heard this before, lo-fi, Pennsylvania