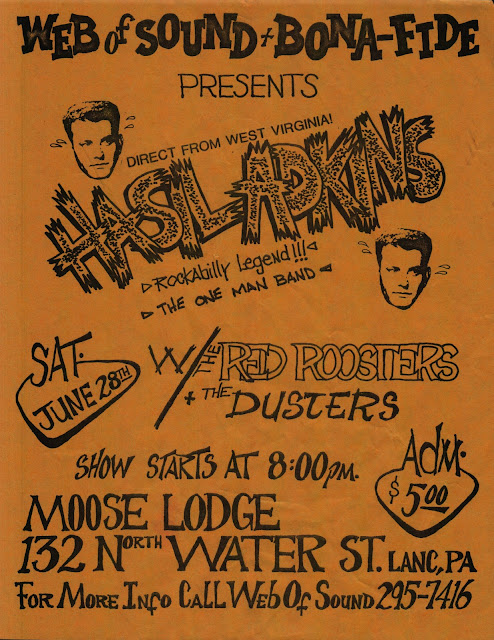 Chances are, if you're reading this blog, you were probably at the Lancaster Moose Lodge on the evening of June 28, 1986. But for those unfamiliar with Hasil Adkins, he recorded dozens of records in the hills of West Virginia on his home 2-track reel-to-reel from the 50's on that were completely ignored until the Cramps covered She Said in the early 80's. After 30 years and several reissues of his recordings, the Haze was launched into the national spotlight, albeit it was a very underground fame he enjoyed with a cult of fans that credited him as a psychobilly pioneer. The Haze was the real thing. 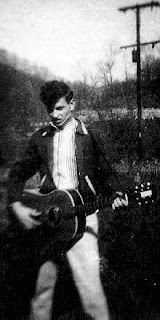 Web of Sound and Bona Fide Records, brought Hasil to Lancaster. Carl from the Web, already the size of a bear, became an official Moose so he could rent the place out. The local rockabilly act the Red Roosters opened up along with The Dusters from Maryland, who were made up of ex-members of the Left and the Skeptics. So it was a damn good show from the start, and Rustle Noonetwisting had his trusty tape recorder and camera along as usual to put the spectacle down in the annals of Lancaster music history.

Hasil Adkins got on stage at the Moose Lodge with his cowboy hat tied under his chin, guitar in hand, and sat down behind a drum kit. He really was a one-man band. According to Norton Records liner notes he said, "I can't have no band. I like to change to different chords and can't expect nobody to follow me."

Right off he started thumping out the bass beat and a hi-hat with his feet and bashing the cymbals with the headstock of the guitar (mind you that's the same headstock containing the tuning keys). Hollered, hooted, shrieked, whistled, crooned, cooed, jabbered, yodeled, and yes, even sang some pretty notes into the microphone. 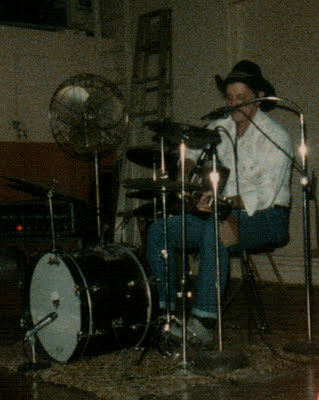 I'm glad to see you all out here tonight.
Thank you for comin'....

You got any special songs you wanna hear....?
Which one?

Ha-ha-ha-ha-ha-ha, ha-ha-ha-ha-ha-ha
Come on baby, don't you be late
I want your head, I want it tonight
Cut your head of at half past eight
I'll have it on my wall about a half past ten...
...
Hello baby.
This ain't no rock'n'roll show ha ha ha ha!
This is me back again cause I need another head.
...
Just like I said, I'm gonna cut your head off
And you can eat no more hot dogs!

She Said
Why's don't I tell you what it is?
I wen' out last night and I got messed up
When I woke up this mornin'
Shoulda seen what I had inna bed wi' me
She comes up at me outta the bed
Pull her hair down the eye
Looks to me like a dyin' can of that commodity meat....

I got a new one coming out.... It's called
She'll See Me Again  Well I hope she will anyway, you know.
[Listen carefully to Hasil's special tuning. I'm pretty sure it hasn't been published in Guitar Player magazine yet.]

Can anybody do The Hunch?
You can?

You got anything else you wanna hear?
[More divergent guitar tuning.]
I Need Your Head
Hello baby
This ain't no rock'n'roll show....

I got about one more tonight.  Then I gotta leave.
13

We want the Haze! 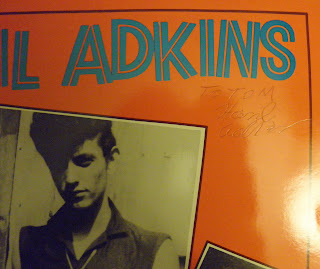 After the show, I took my copy of Out To Hunch up to Hasil Adkins for an autograph, which he was more than happy to oblige. Sounded something like this...He said:

The Haze was the real thing.
Posted by tomsun at 11:10 PM