Songs & Stories of the Justice League of America

My little brother had this record when we were growing up.  For some reason I put it on in high school and was treated with these great cornball pop superhero theme songs.  The record was on Power Records from 1975, so I was always puzzled about why the songs sounded so retro. But it made the campy interludes on quite a few of the tape compilations I made for friends through college. 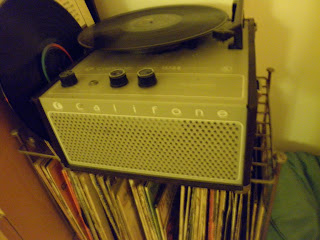 I held on to it all these years and gave it to my daughters along with a cool classroom phonograph, believing as I do that children should be taught early to handle their records by the edge and to gently cue the needle.

Just last week, my fave DJ, Dave the Spazz played the Justice League Theme on WFMU, so I went upstairs and pulled it out of the girls' record collection (still in pretty good shape). According to the mighty Internet, the record was originally released in the mid-60s by Tilton Records and contained three additional songs that I never heard.  There are no credits on the sleeve, but apparently the whole thing was written and produced by Arthur Korb.  No idea if he's playing, singing, or doing any of the voices. So here are the complete songs from the Tilton release: 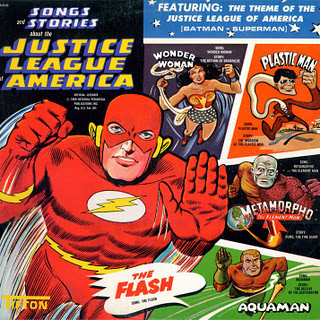 
Thanks to the Power Records blog and  Way Out Junk for the tracks.  Get the complete songs and stories there.
Posted by tomsun at 9:59 PM