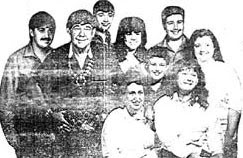 James "Rebel" O'Leary and the Texas Rebelettes have gotten a lot of snarky crap on the Internet since grandpa James passed away about lacking talent or enthusiasm, but I can sympathize with his grand-daughters' responses:

"That is my damn grandfather. I don't see any of you on TV, and at least they tried to make something of their lives unlike any of you people." -Vicki O'Leary 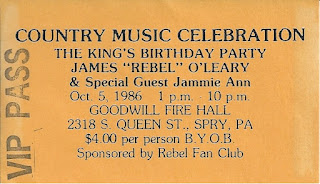 I only got to see The Rebel once: at his annual birthday party in York County, Pennsylvania. It was in a big hall full of people who all came to hear him play; family, friends, country music lovers and kids like me who just had to check this out. I never had seen a live country band, and everyone was having a good time. That's all that mattered.

Life with my grandfather was awesome. Shame you missed the fun. -Faith Ann O'Leary 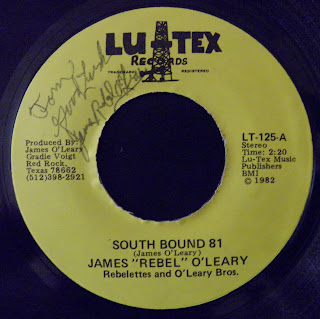 I bought his record that day. A 45 with two original compositions that he happily signed.

At some point in the intervening years, cities, and apartments, I left the single too close to a radiator and warped the edge making the first 30-seconds like a little ski-jump that sent the tone arm flying to about the second chorus. The unplayability made it a good candidate for a drastic rescue attempt. I gave it about a 40% chance of surviving the operation, so before proceeding I recorded what I could get out of it:
South Bound 81 (warped edge)


I'm a plain old music man
Just lookin' for fame
They call me country
But Rebel is my name!

I-81 is a about a 500-mile drive through the Appalachians from York County to right about Knoxville. Then you make a right towards Nashville. 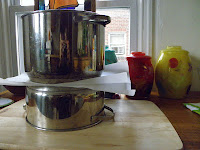 Before I totally destroyed my Rebel 45, I tried my quackery on one of my kids' warped Sesame Street records (with permission). So I sandwiched it between two large pots that I had warmed the oven. First attempt at 190 degrees had little effect. Second attempt at 250 flattened the obvious warp but left the surface slightly warbled. Success! ...Well, sort of. It was now playable with some weight on the needle to keep it crunched down in the groove. 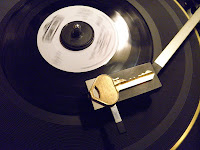 Sesame Street - Would You Like to Buy an O? (post-semi-successful dewarping)

So, figuring this was the as good as I could do, I repeated the procedure with the Rebel single. But I added a second pot on top to see if it would smooth out the warbles, and went outside to ride bikes with my daughter. 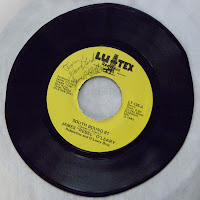 But, back to the real James "Rebel" O'Leary. I argue that he could sing and was probably more authentic than the glitzy Nashville acts he sang about. Just give a listen to A.P. Carter, the real grandfather of country music. By today's overproduced commercial standards, he may sound flat, but there's a real tradition in that style of singing. And the Rebelettes' guitar and pedal steel sound great together! Country music, and all music really, has it's roots in families and friends with improvised instruments, self-taught styles, and real jobs in the daytime. The O'Leary family is part of that tradition and I hope they pass it on. More importantly perhaps, he did sing. I feel lucky to have seen a little part of it, so right on Vicki: "LEAVE MY GRANDPA ALONE!"

If you have a playable copy of the South Bound 81 single, please send me the tracks. I'd love to post them to do grandpa the justice he deserves.

Addendum: Thanks to Tom Casetta from Listen Up! for sending two unscathed rips of the Rebel single off of the Only in America, Vol 2 compilation. I love that tentative pedal steel intro!
South Bound 81
Rebel Star