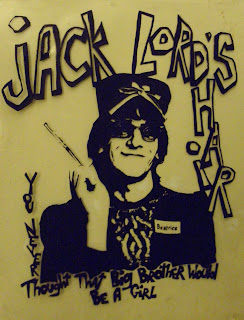 After The Real Gone self-destructed on stage at the Enola American Legion, Rex and I wasted no time recruiting Mark (Gumby) from The Bodies, and Jack Lord's Hair was born, a franchise that went on and on like a TV show with various sequels and spinoffs from 1986 well into the 90's.

Season 1 consisted of a few short episodes and cast changes from 1986-87.

Episode 1 - "Penal Code" was the first band name and lasted just a few practices in Doc & Sis's basement, along with the first JLH song, Wax Museum. Tommy Bang from the Bodies was on drums and the name was a dig at local new wave band Color Code. 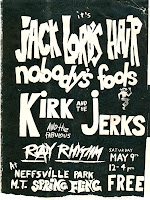 Episode 2 - "Kiddee Zoo" brought Steven from the Real Gone back on drums and Andy from the Combat Hamsters and Substitute.


WFNM Interview (at least the parts that won't get us sued) on John A's Punk's Not Dead show - We manage to abuse the equipment and insult just about everyone who might have been listening. The station manager called and made us play the disclaimer cart.

The War of the Monster Trucks was recorded on a 4-track cassette machine borrowed from local punker Ray Rhythm in exchange for getting John to play his tape in the air. These were all done in one take, and if one of us forgot the part...oh well! I think Mark just started cracking up on a few songs and we never went back and overdubbed the vocals. War of the Monster Trucks I'm a good ol' boy in PA, in the land of the Dutch. When I get home from the factory I can't deal with the wife too much. So tonight me and the boys are goin' up to the Farm Show Arena. We'll get piss drunk on Rolling Rock and be laughing like hyenas. See you at The BUCK! There's troubles in this world, we don't give a fuck. Cause tonight we're goin' to the War of the Monster Trucks. Well I love to watch them suckers when they're crushin' up a Ford sedan. If I could drive a rig like that I'd feel like such a man. Cause them monster trucks are hellish and if you don't like 'em you're gay. They make me feel so goddamn glad to be born in the USA. Those commies better start runnin', they'll soon be out of luck. Cause we got Rambo and the War of the Monster Trucks.
I Wanna Marry Martha Quinn
Laid To Waste
Kiddee Zoo
Rocket of Love
Anarchy Anarchy! Anarchy! I don't say the Pledge! Anarchy! Anarchy! Give your mom a wedge! [Made up by friends drumming on the table in the Manheim Township High School library. It grew legs and both JLH and Ray Rhythm ended up recording it.] Steven: I remember Mark starting out this show with one of my favorite lines of his: "Thanks to the Ocean Blue for playing. They're pretty good....FOR WHAT THEY DO". The capital letters don't quite capture the dripping sarcasm, but you get the picture.

After Andy and I split for college the Hair reformed with Russ on bass. They got just serious enough to learn how to play their songs.... ...Season 2: The Difference Between Trash and Garbage....