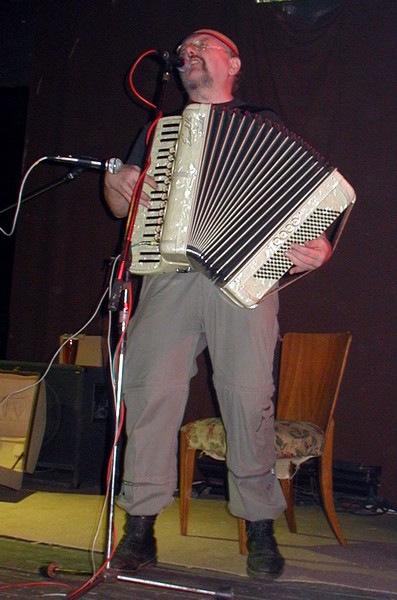 For awhile our San Francisco flat on Valencia Street took on a bit of carnivalesque with a procession of bike messengers, musicians, artists, film makers, and other fine riffraff coming through with local film screenings on the back porch. And completing our Bohemian cred was a crazy Czech guy in a skullcap with an accordion the size of a lawnmower.

Every day I get up deviled, slowly becoming the devil himself. (Jim Čert  - Křišťálová studánka) 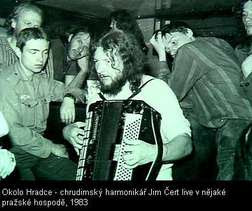 Čert was known for his dissent against the Communist regime in the '80s Czech music scene, prior to the Velvet Revolution in Czech in late 1989. He was jailed several times for creating music deemed "anti-social" by the Communist state, who would not let musicians perform without state approval. However, files found in 1989 show that Čert was involved with state, working under police pressure as a secret informant. (Wikipedia)

I Died One Monday Jim left the new Czech Republic and started over in San Francisco where he fronted a band appropriately called Life After Life with fellow dissident Jaroslav Sedivy. They put out a record on Alternative Tentacles, but I knew him as a solo performer opening up for the likes of L-Sid and Polkacide. The jovial guy at every party who did an impromptu late night set in our flat. Despite his deep growl, and dastardly cackle, I once saw him floor the audience by whistling an entire song, with vibrato and in perfect tune. Where did that come from? 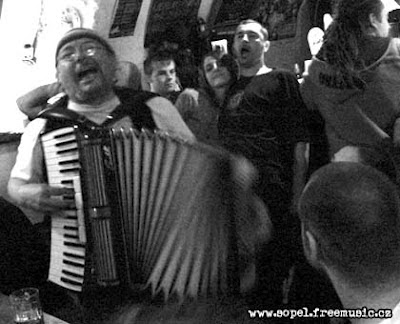 In 2007, Jim formally apologized for his collaboration with state police, and is now living and performing back in Prague.

I went away distressed and the wind laughed at me. Thinking I'm the State - what will be next? And by the valley of tears I look forward to my people understanding. I was hoping that this goddamn order would collapse, and that I'd have my country happily ever after....

...United States, American, Good morning... How are you?