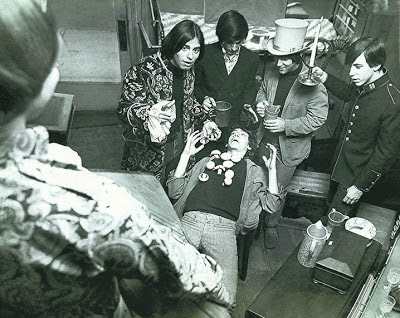 The Magic Mushrooms were made up of U Penn students who chased down Allen Ginsburg at an event on campus to ask him to suggest a band name. Herp Alpert signed them to a record deal, figured out the drug reference, and dropped them from the label... but that was after they had recorded and released
It's-A-Happening on A&M Records.

I first heard it on Nuggets, the record that spawned the avalanche of garage band compilations that were such a huge influence on me in the 80's, and found a cracked copy of the single in a thrift store.

They released two more singles on smaller labels before calling it quits. The b-sides were the best tracks on both:
Never Let Go
Let the Rain Be Me

Thanks again to the indispensable Garage Hangover for the tracks. Lots more info there.... Apparently there exist enough unreleased acetates and reel-to-reel tapes for an album somewhere. It would be nice if they saw the light of day, but in the meantime, I don't need much of an excuse to play this:
Tex & the Horseheads - It's-A-Happening (1985).
Posted by tomsun at 2:25 AM