Parental Advisory: This is NOT the Virginia children's band that uses the same name. 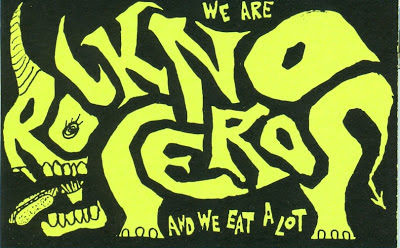 Rocknoceros roamed the Philadelphia area between 1989 and 1991 playing a few shows and releasing a cassette titled "We Are Rocknoceros and We Eat a Lot!," a collection of 7 not-so-subtle songs about feeding and mating, the primary behaviors of this particular species. 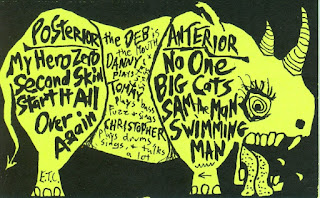 No One
Big Cats
Sam the Man
Swimming Man
Big Balls
...My Hero Zero
Second Skin
Start It All Over Again
Rocknoceros Theme
Call of the Rocknoceros 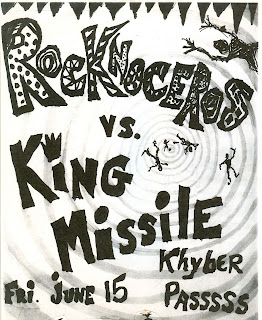 Review from File 13, June 1991: The deeper I got into this, the more I liked it. First, it's very funny. Clever liner notes, including a Rocknoceros action figure (some assembly required), and a pleasant trip down memory lane with a cover of the old Schoolhouse Rock classic "My Hero Zero." Moreover, it's good, crashing rock & roll, a little more than the B-52's -- who are eerily recalled both during the Rocknoceros Theme Song and the breezy, lilting vocals running through "Big Cats" -- and a little less than Sonic Youth, although that's where they seem to be headed. The abrasive-voiced Debbie ... 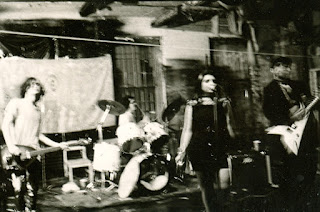 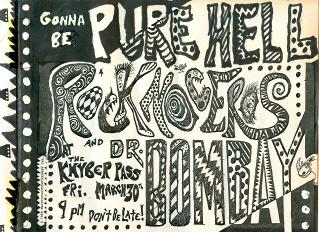 Dan: Let’s see..there was the story of our tape being mastered. We had recorded it in Tom’s west Philly basement on a 4 track and sent it to Valley Forge Music for mastering and reproduction. When we didn’t like the dolby they put on it, the president of the company decided he would master it himself. He took one listen and sent the tape back to us saying it was obscene and that he did not want our business! He refused to reproduce it! We were banned! 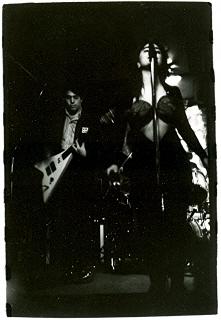 Tom came to me one day and said “wanna be in a band? i want to put a band together that’s like the punk version of Kiss”. So we always dressed up in crazy outfits. Tom had some sort of lion suit (or something like that!). We played a lot of parties (Funk Dungeon, Rodman St. block party etc…) When we played at Khyber the 1st time, Debbie (our singer) wore this home made bullet bra contraption, like the one Madonna made famous but it was before Madonna did it! We played at the Fairmount Prison Block party. Mega Jimmy drove us there and when we got there it was full of kids and grandmas and family types. We convinced Deb that we should still play. At one point, a tween girl came up to the stage and yelled at us 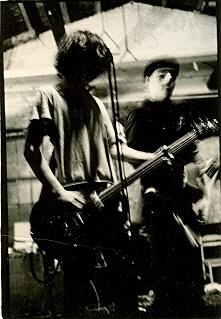 “CAN YOU TURN DOWN, YOU’RE GIVING EVERYONE A HEADACHE!” There was one teenage boy that loved us though, so it was worth it. Not much else to say. It was my favorite band that I’ve been in and a lot of fun. I still think that the songs were good. -From  Freedom Has No Bounds

Deb and Chris were art students at PCA so they might have gotten class credit for making Rocknoceros outfits. I remember going to a theatrical costume shop in Philly that had these sales where you could fill a bag with old costumes for five dollars. Dan found a sort of colonial minuteman coat, and I found a leopard suit with the ass 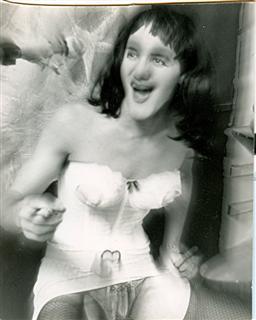 torn out and some red lamé fabric that I made pants out of. And I spray painted a pair of platform shoes bright yellow that I nearly broke an ankle on. Chris dressed in total whacked-out drag and even somehow made huge and scary strap-on female genitalia that looked hilarious when he sat down at the drums and hiked up his skirt.

In 1991, the Rocknoceri migrated to Sydney, San Francisco, New York City, and St. Louis in search of more grazing and love.

"We Are Rocknoceros and We Eat a Lot!" is still available in the UK from Acid Tapes (TAB 080).