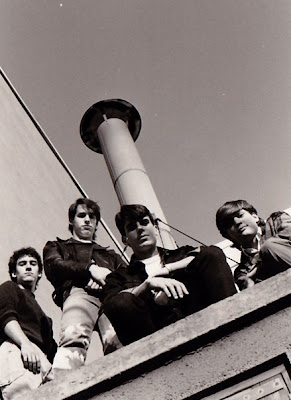 Briggs Beall was one of the first bands to play and record original not ready for primetime pop in 1980s Lancaster. Their first tape, Moral Complication, brought 80s jangle and post punk influences into their sound via a 4-track cassette machine and was an inspiration to the few other garage bands in town to start recording their own songs. Despite the variety of musical genres we played... pop, garage, punk, hardcore...we shared the bills at shows and a few dozen local fans that appreciated something original and creative.

Fast forward to Spring of 2013, and the members of Briggs Beall reunite to support guitarist Rob Miller and his wife Suzanne with their simultaneous struggles with brain and ovarian cancer. Rob passed away in May, and in the wake of his death, band members and friends have been reassembling memories of the times they had with Rob and Briggs Beall, along with a few of Rob's own memories from emails and the band's Facebook page. 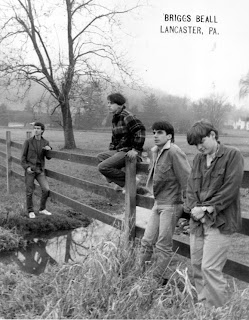 John Emery: Long before Briggs Beall existed, music was a big part of our friendship. We felt as if we were part of a small minority of people interested in “alternative” music in Lancaster, and after being “roadies” a couple of times for my brother’s band [The Press Club], the idea was generated to form our own band. However, Rob Miller played clarinet in high school, and we weren’t so “alternative” that we would have a clarinet in a rock band, so Rob taught himself guitar.

Dave Evans: For me it meant learning to play any instrument and Rob had just started learning guitar. Freshman summer saw the creation of "The Rain." In various iterations it included Rob, me, Kent and Scott Stauffer. We toyed with being a reggae band - that was extremely brief.

Those early days were fun and full of big ideas.  We had no clear direction and we weren't even sure from week to week about who was in the band. Thought about buying conga drums, marimbas and all kinds of things.  Ultimately we stuck with the instruments we actually had access to and the music we could play.

John: The band started playing covers of favorite alt rock songs, including those of REM, The Smiths, Elvis Costello, etc.. We started writing a lot of original songs as well, something that had started with “The Rain”. Feeling that “The Rain” was a little depressing, we decided on a new name, “Briggs Beall”, the name of a character in a James Thurber short story.


Dave: We wrote a few songs - Soldier of Fortune, Star Hits, Emotion:Anxiety. I think it was at Thanksgiving break of Sophomore year that John joined us and made us SOOOOO much better. That Christmas we recorded the "Moral Complication" tape and the rest is history!

John: Bottle Refuge Studios was my family's basement and my brother Rob's 4-track recorder. It was aptly named "Bottle Refuge" because there were tons of empty bottles - not all beer (lots of diet pepsi) - littering the counter tops. 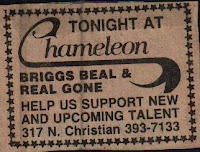 Live at Chameleon (1985)
Something 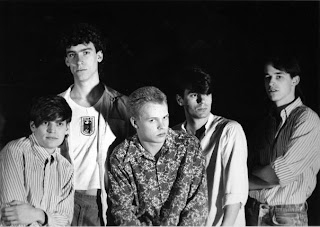 John: Rob Braden joined the band on drums in 1984, which allowed Kent to move into the front man/lead singer position. We released our 2nd self-titled cassette tape, which actually sold a couple hundred copies at Lancaster stores such as Stan's Records and Zap's. The band promoted itself by organizing a concert in a public square by the Brunswick Hotel in downtown Lancaster, which helped us to start building a small but loyal following. 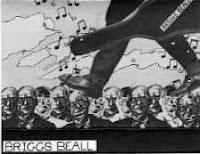 John: The band continued to land gigs at Lancaster clubs, including The Inn in Millersville, where Rob M. was a student, and all ages shows at the Chameleon Club on its original location. 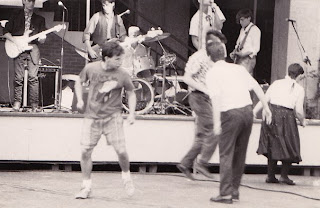 The Patch Sessions (1987)
All For Me
Assembly
Klingman

John: In 1986-1987 most of the band members moved to the Philadelphia area, where we were able to play a number of clubs in Philadelphia, including one of our favorites, JC Dobbs, as well as Khyber Pass, Revival, and the Ambler and Chestnut Cabarets. Rob B. was still living in Lancaster, and opted to leave the band in ~1987 due to the challenge of commuting to gigs in Philadelphia. Rob B. was succeeded by subsequent drummers Mick (‘87-’88) and Pete (‘88-’89), both of whom brought their own sounds to the band.

Mick McDermott: I remember my audition at Crefeld. When I walked in Rob Miller was closest to the door. I remember the Ric guitar the most, Rob was very warm and welcoming which put me at ease. To me he was extremely patient and when I would get cranky during practice he would say take it easy it is ok.I got a kick out of the pointy shoes at the gigs as well. 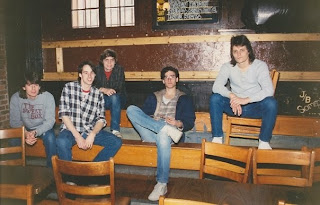 John: The Midgets of Rock tour, as Dave refers to it, was a weekend tour which took us to Buffalo NY to play a Friday night concert at the high school of Rob’s sister, followed by a drive to Pittsburgh to play at the legendary club, The Decade. The latter gig was booked by our manager Bob, who originally hailed from Pittsburgh. Bruce Springsteen was rumored to be in town that weekend, and he was known to show up at The Decade when in town, but alas, he never showed.


Looking back, with the exception of our drummers, we were all self-taught on our instruments, and the reason we achieved the limited success that we had was due to hard work, perseverance, and perhaps naiveté, not knowing that we really had no business playing in some of the clubs we performed.
Not sure if this is funny, or pathetic, but after having opened for several bands at JC Dobbs on South Street in Philadelphia, the manager, Cathy, was kind enough to book us for a headline gig on a weekday night. Unfortunately, the opening band was Trip Shakespeare, whose members ultimately went on to form the band Semisonic. Well, Trip Shakespeare were awesome musicians, and they completely blew us away musically. It was a pretty humbling experience for us, as we were perhaps not quite ready for a headline gig at Dobbs. On the bright side, that was where Rob learned of Trip Shakespeare, a band that he really enjoyed for years after. 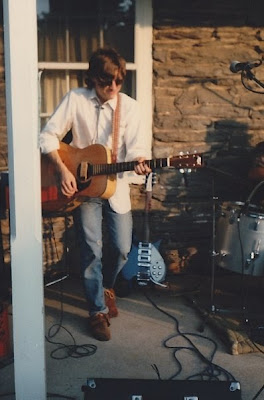 Perseverance is something I think of when I think of Rob, as I have vivid memories of him, working through a guitar part with his long fingers, slowly and deliberately, then taking it home and practicing incessantly, eventually nailing the part.


Dave: Rob's contributions evolved with the band. In the beginning Rob was very folky - Yellow Bunnies. He was the master of songs about nervousness - Emotion Anxiety, Tad's Closet. He was mod for a while. He had his Nehru jacket and his giant Beatle boots. He played with his huge toothy grin. My sister always comments about his smile when she talks about him. Towards the end he wrote with Pete - Evolution. Rob sang all the Violent Femmes songs and sounds more like Gordon Gano than Gordon Gano.

Kent: Rob’s rhythm guitar playing was the foundation of our sound. He truly brought unique musical ideas to song writing, often using dissonant chords and distinctive rhythms, which was a great counterbalance to the poppy tendencies of his bandmates.

John: Rob had style. Period. Rob could pull off fashions and haircuts that nobody else could. If we dressed like Rob, we would look like jerks, but Rob could pull it off. From puke green, to 70’s yellows, to his Dorothy Hamel pageboy haircut for a time, it looked good on Rob, and he wore it with style and confidence.

Dave: Suzanne [Rob's wife] says “he shops like a girl” and she is right. Meticulously picking through every item – from the hat on his head to the shoes on his feet.

One fall, Rob and Kent and I set off to NYC to get Rob some boots. He knew of a store and had an address. Mind you, this was before Siri directed us everywhere. We arrive in NYC and thought we needed to go to 80th street or somewhere such. After traveling up to the 80’s and then over what seemed to be all of NYC, and spending a lot of our cash to do so, we arrived in SOHO at the store where Rob found the coveted boots. We barely had enough money for the train fare home but we found the boots. He wore them at every show after that. 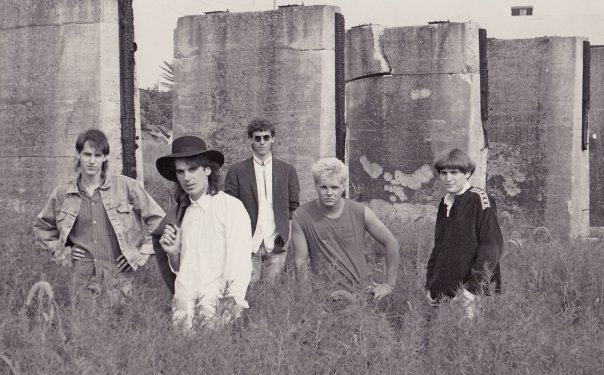 John: Rob also wrote great lyrics, often a little dark, but very creative and poetic. His collaboration with Pete on the song Evolution was about roadkill. Who else would have written a song about roadkill, … but it worked.

John: There are lots of pictures in my head when I think about Rob in the band, from his cool Rickenbacker guitars, to stepping out front to sing Violent Femmes and Gang of Four covers, to playing one-finger organ on a cover of The Monkees Stepping Stone. And the audio ‘picture’ that is quintessentially Rob is his delivery of the phrase “... and I don’t like it” in the song Emotion-Anxiety.

I think the band stopped playing because we felt we had given music a good shot, and it was time to get on with our "real" careers. Dave was going to med school, Kent to graduate school (education), Rob was working as a biochemist, I was in grad school (molecular biology) and our drummer Pete was headed to architecture school. "Break up" is probably the wrong word, as we're all close to this day. In fact, every 3-5 years the core 4 of us (Rob, Dave, Kent, John) vacation together with our families. This started with Dave's wedding in 1997, with the most recent reunion in 2011.

Dave: I completely agree that using the word "breakup" to describe the band members moving on is not ideal. I agree with John's description. We were all in our mid 20's and saw a life beyond Briggs Beall. While we did move past the band, we also kept a finger on the guitar string. What is it that the Sirius station says, "Respect for the past without being stuck in it"? Briggs Beall existed for about 5 years. They were great years full of hard work and fun – but formative ones as well. The band and music served as the foundation for a lifelong friendship that has endured for over 30 years – years that have seen raucous laughter, bad breakups, successful marriages, fantastic children and a lot of great times then and through the years. 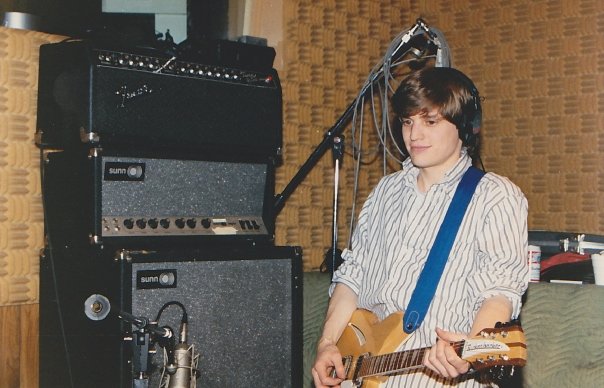 For Rob Miller and his friends and family.
Posted by tomsun at 11:06 PM