When I first started playing with Rex in 1985, he was fresh from Last Knight, or kicked out, as the story goes, for wanting to play other music, and he still had his Flying-V and a metal hangover (gunk-gunk-gunk...full vertical fleedy fleedy fleedy hammer-ons....) despite our best efforts to be garage punks. I recently salvaged a tape that turned out to be somewhat of a Rex anthology with recordings by Jet Silver & the Dolls of Venus, some Charms du Crane outtakes, and the oft porodied at band practice, "Last Ku-night". Silent Scream was legendary in my basement, and Nowhere To Hide was labeled on the tape God Awful Song.

When Sean posted some old photos on Facebook, I added the tape tracks and sparked a classic geezer good-ole-days conversation below (semi-edited to protect the innocent and embarrassed): 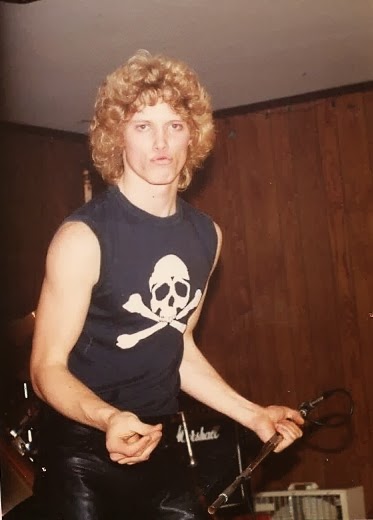 John - Apparently just about every death metal band has recorded a song entitled, Silent Scream.  I did a search and found roughly 100 artists that have a song by that name.
Sean - Unfreakin believable. Uh can we have a retake on Nowhere To Hide? LOL! Boy would I do that differently today. Talk about memories.
John - I do remember playing at places we had no business playing at...  Nothing says "wrong" like playing Iron Maiden, Accept, and Ozzy at country bars. I also remember a few legendary rancid farts on the way to a gig, but I digress...
Sean - How about splitting black leather pants at the 40/8 and having bright red underwear on! I think I remember a bass jabbing me up the butt.
Tim - Martic Forge Hotel....: "You guys play country and western??", Uh....No!
Gregg - We had our vehicles right next to the door! ...the owner asked me if we played "that steel shit"! Of course I said no. Hahahaha!
Andy - That Steel Shit! I love it! Ha!
Sean - Hilarious.
What was the place called in Leola that we played at. Every time we played a riot broke out. Remember a biker wanted to kick my ass one night because his girl was dirty dancing in front of me. And she was no catch...missing teeth and all. Bob had to save me...get my ass out of there.
Andy - Yeah I remember that puggy lady with missing teeth stroking the angular part of the Hondo while she was dancing. First time I felt like puking while playing a show!
Sean - That's right I remember that. Crack me up. LOL!
Who was the band we opened for one time at the Village? They wouldn't let us play any Billy Idol because they played it. I remember the dressing room there was filled with liquor and contraband and we were like 18-19 years old.
Andy - I think it was Quentin Jones and some other guy with the fake last name "Star".
Gregg - Starr Jones!!! Oh yeah!
The place in Leola was called the Keg!!! I still have a couple of drink chips from that place. Yeah, it was classy!!! It got bulldozed in the late 80's...
Sean - That's right Star Jones. If I remember correctly they didn't play Idol that well. Yes it was the Keg. What a place that was.
John - …and the Martic Forge burnt to the ground (the owner set it a flame and it almost interfered with Timmy and my fishing trip in Pequea)...
As I recall when we backed into the place (literally) using the stake truck we "borrowed" from Brewer's Outlet, and the shitty PA we rented from Mariani Music.  Great times!
It's funny how it all starts coming back...
I also remember Timmy borrowing a van from the construction guy he was working for to haul the PA gear...  we were driving home from the Keg using only high beams as both low beam filaments were gone.  Then one of the high beams burnt out as well.  It started to rain, he turned on the wipers and the entire wiper arm fell off  the connecting arm started to scratch a groove in the windshield...  I almost pee'd myself, and Timmy wasn't amused.
Sean - I think the fat chick from the keg ended up at the after party at Timmy's, skinny dipping in the neighbors pool....and who can forget the chicks with the body paints....OMG!
Andy - Yeah I remember missing a party over at Bob's where you guys scammed a restaurant out of a keg of beer by pretending you were another bar.
John - Hey, you can't prove that!
Andy - You're right, I just heard it. Probably just a rumor right?
John - Lies I tell you!  Rumors, Fabrications!
Did I forget legendary...  Awesome, and pure genius.
Andy  - That's more how I remember it!
John - Holy Cheese we played everything fast. Hot for Teacher is laughable.  We'd have made the Dickies proud. And we wonder why nobody ever danced...
Tim - I remember setting up at the Keg, stepping over the drunk guy passed out on the floor. Lots of stuff happened at the Keg, license plate stolen, several "fans" came out to that shitty van to sign up for the fan club. I'm sure we can come up with more.
John - How 'bout...  She ate at Rax, or Wild Thing...  you broke my porch swing...  you cleaned out Burger King...
Andy - You bust my bedsprings...you ate my chicken wings
How about when Bob referred to Rumple Stiltskin as "Crumpled Foreskin"
Gregg - y i k e s !
The land that time forgot.
Sean - Right....LOL...but I certainly will never forget.... 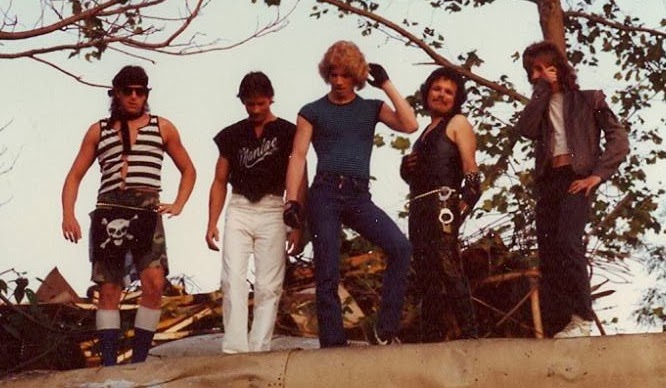