We wish to take this time to welcome you to our world,
OUR BRAND of COUNTRY....
Come travel with us, share our thoughts,
memories, our past, our future, our DREAMS,
until we meet again.... 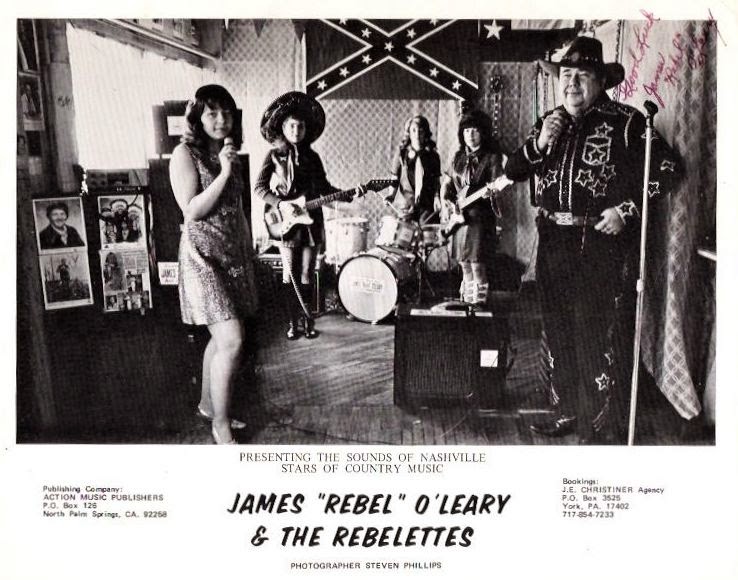 I met the Rebel at his annual 39th birthday celebration in 1986. He had stopped at aged "39" some years back; no one really knows how many. This was an event not to be missed, not just for the Reb... and his family backing band... and his 30 pounds of jewelry... and his wig, but also to see their regular opening act, the Yahoos, play Sister Ray and destroy their instruments on stage to the uneasy amusement of the Rebel, family, and friends. It was such an odd match-up, but one that everyone seemed to enjoy. Then again, The Rebel was just a little out of place just about anywhere he went.


Gus Aguirre: They would walk around the York Mall Friday night... .. a lot of kids would make fun of them.. but looking back.. this guy had a great attitude and always had a smile... he did what he wanted to do...and didn't give a hoot about what anyone thought!! Pretty punk rock if you ask me!! Rock on Rebel!!!

The only studio recording that I know of was the Southbound 81 single sold at the annual Fan Fair in Nashville, right down that lonesome highway, along with this VHS tape of a special aired on Cable TV of York: 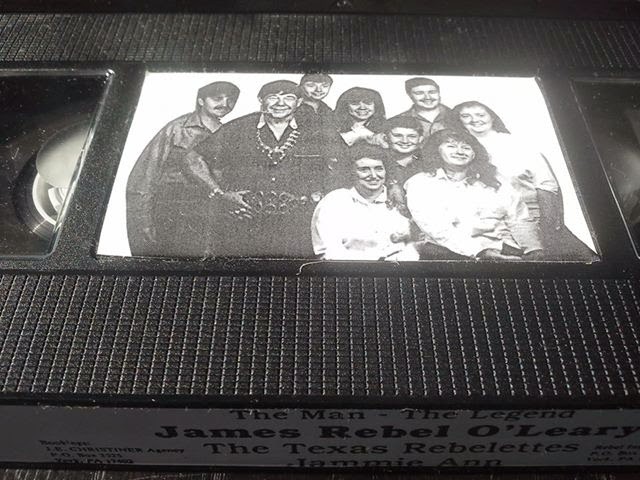 The following interviews feature the Rebel excerpted from the 1986 video interspersed with 2014 recollections from Bob Campbell of the Rebel's opening band, the Yahoos. 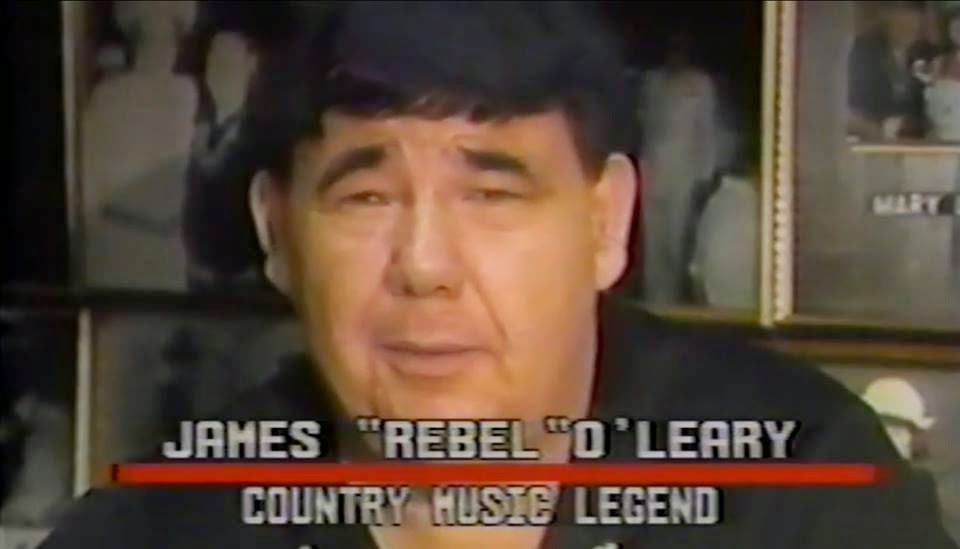 Rebel: Well I originally got in music when I was about approximately between 5 or 6 years old. My brother and I, we was on a ranch; I was born in El Paso, Texas, and there we have two things: They give ya a guitar and they give ya a gun; learn ya how to shoot it....

Bob Campbell: I had been following Rebel and the family band for quite a while before they started having the regular birthday parties.  I was always into different music from my friends and could appreciate the Rebel as sort of a local version of the Shaggs. See, while others talk about how bad they were, I didn't really see it that way. One thing I got to understand about them is that they were very consistent in their quirkiness. One listen to a song like 'Ring of Fire' and you think about how they got it wrong with misplaced riffs and odd fills, but after I saw them several different times I realized that this was their "style." They played those same riffs and fills each and every time. Rosettia's steel guitar riffs were consistent in their wide, sweeping spaceship like tones for example. 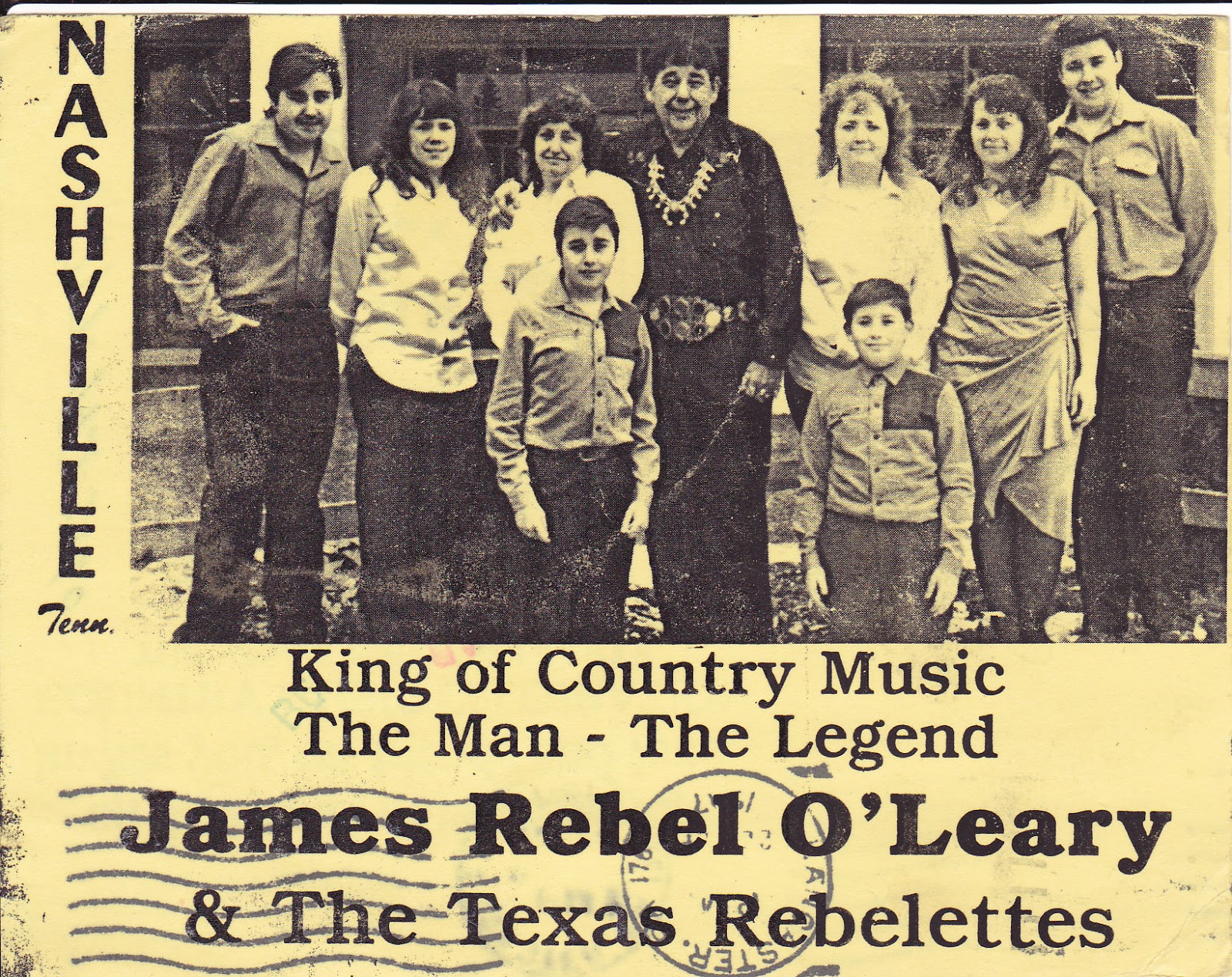 Rebel: I'm called a rebel because I broke from a part there of music. These days when I go back, and I'm speaking twenty years back, I ___ different upbeat country. Them days it was more or less a personality in music more-in-less the music itself. Now you call it "easy listening" and so forth. Them days it was "upbeat" country, which they almost considered you "rock." It isn't rock, but they considered you on a ___. And I enjoyed myself very much in my new style, and I was called "Rebel" because I broke from part of standard positions in music.

Bob: Because the Rebel and the Rebelettes were consistent, us regulars could really get into it. For example, during the chorus of "Your Cheating Heart" the great Hank Williams song, the band would launch into almost a march feel. Our group of fans would pound the table, buddababumb, buddababump', building up with volume and intensity until the climax where the last line of the chorus was sang and they went back into a more traditional country feel. 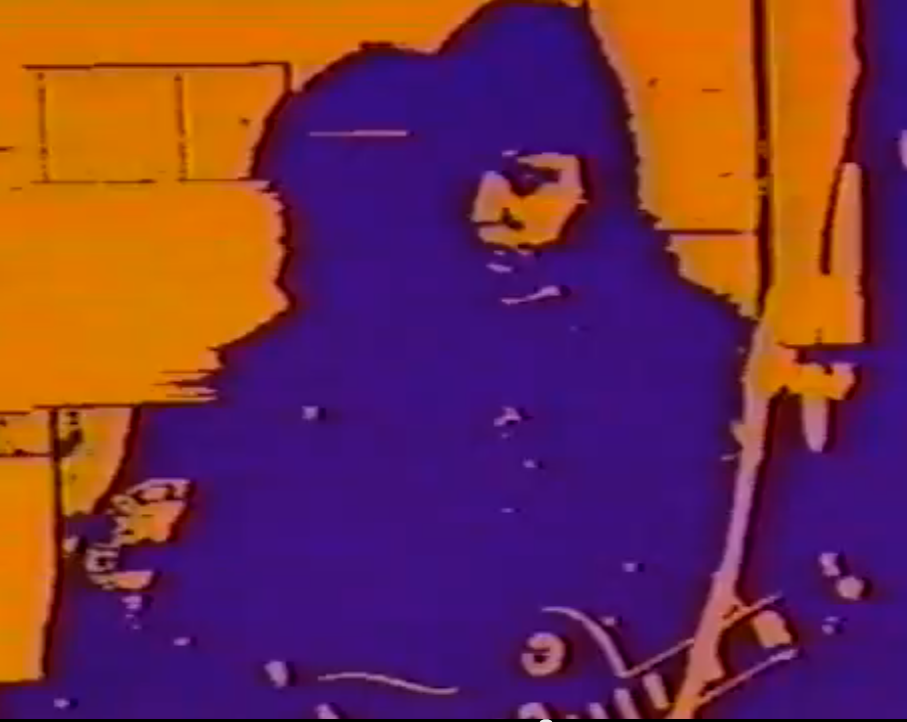 Rebel: I do like original country music, and I write quite a bit myself, but I think everything should be alive and have feeling in it.... I have to get in the mood, in other words, it's like you do anything else. I gotta feel the music in my body and soul. When the[re are] musicians around me, you can feel em. It's like walkin in church; you know it's there or it isn't. So that's the way I feel about a musician; either he has it or he doesn't have it. It takes a special kind of breed of people to be a musician. 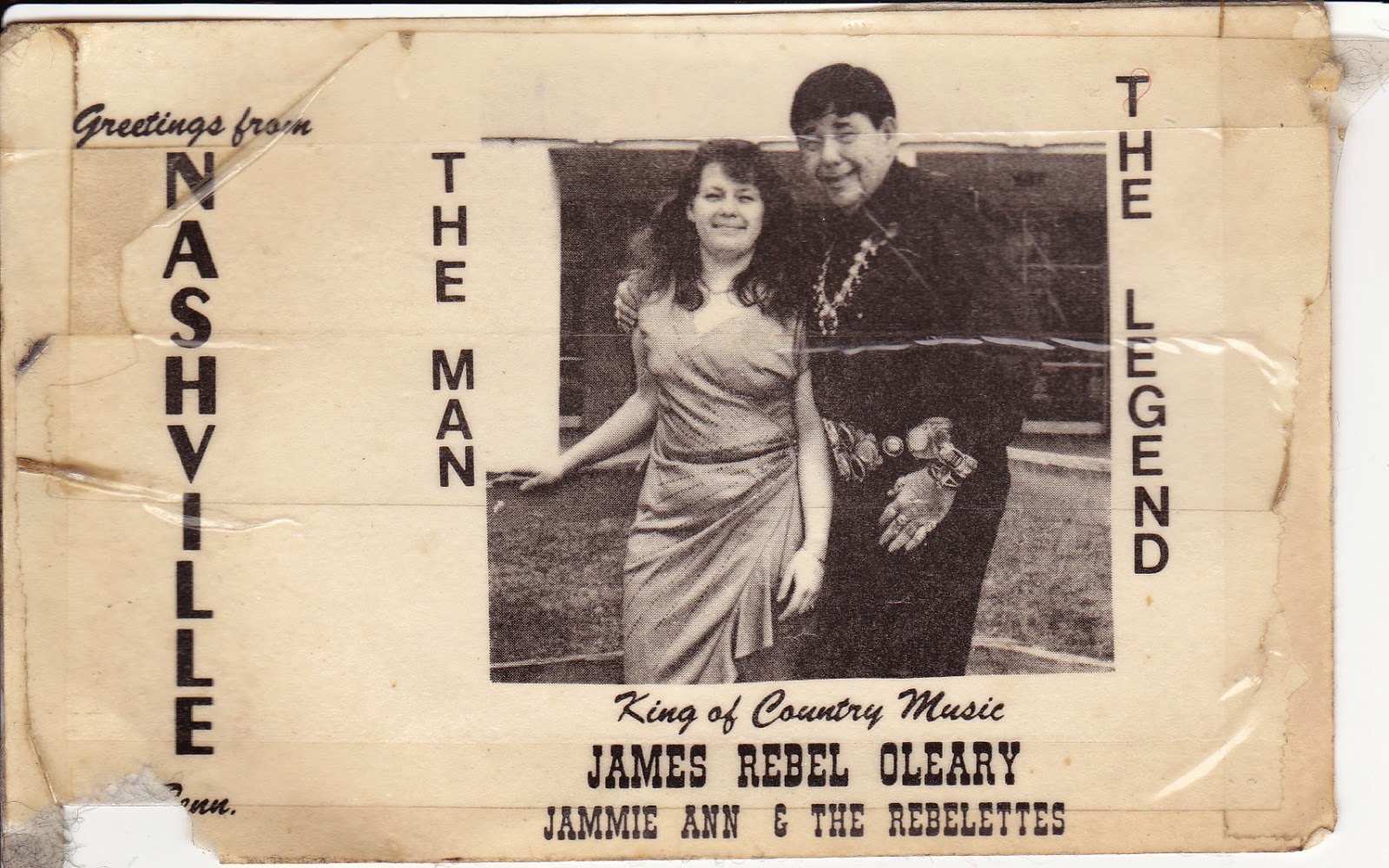 Bob:  I got invited to the birthday parties and eventually asked to put something together and play a set. So, in 1984 the Yahoos made their first appearance. We were a loose collection of musicians who patched together songs like White Light/White Heat, Folsom Prison Blues and the Mr. Ed theme song. We all dressed up a little weird (or a lot weird for some of us) but played a fairly normal set of tunes. And our instruments were pretty standard except for the electric banjo made out of a piece of plywood and played through an envelope filter. So, the Rebel crew invited us back.

Rebel: It gives you a great feelin inside, and it still does when I go out into the full house.... If you can give yourself to people; if they can enjoy you; you got it made. ...I sing from within. I don't sing for money. You have to have money. It's a real rugged life; it ain't easy.

Bob: The following year, 1985, the birthday show moved to the local firehall, possibly in part because our tuxedo wearing guitarist accidentally smashed a light at the last place. Fueled on by our success the year before, several of us formed the Lost Yahoos and dressed a little crazier, played a little more weird stuff and used a drum machine. During this show, the three core members proceeded to destroy our instruments by hatchet and drill during Folsom Prison Blues.  First we donned masks of some sort, launched into the intro riff and immediately began the mutilation process. I had a power drill behind my amp for this part. Part way into this I had arranged for 2 friends who had played with us in the Yahoos, come up on stage and tie me up. This was our big finale. 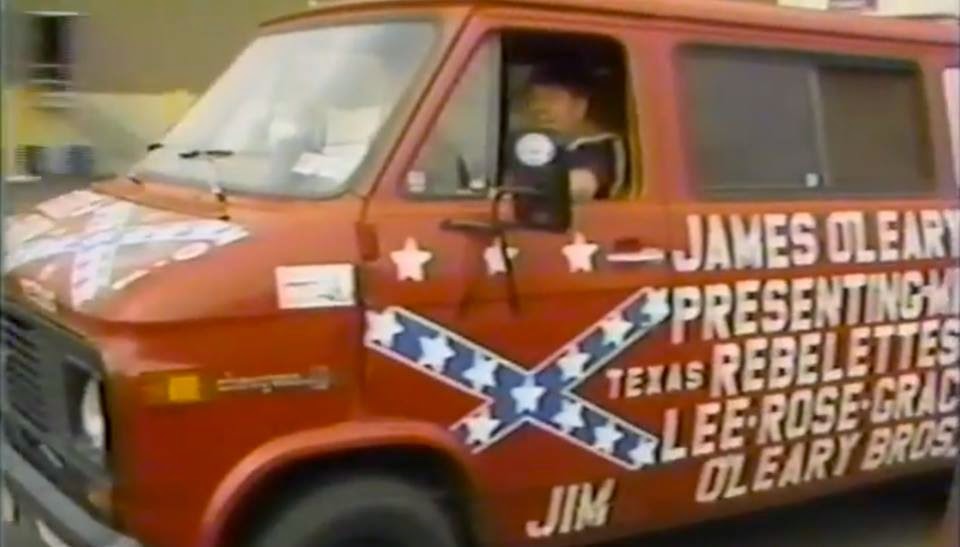 Rebel: There used to be in the older days where I can remember when I first started you'd grab a guitar and strapped it on your back, and a few guys'd jump in the car and you went to the Wheeling Jamboree, even Nashville. You also went into a club or something, and you had a few drinks now and then... maybe it got a little rough in the olden days, little more than it is now. ...You was wilder maybe.

I've been in a few fights in my life, sometimes in self-defense. Never went out of my way to pick one. I guess I've had to 'fend myself in my life; even playin musicians sometimes your own musicians 'll get a little 'tight or somethin, or a little jealous....

Bob: We played two more years for the Rebel and then the shows stopped. You could always count on a big set from the Rebel featuring the other band members singing a few tunes. Certain songs I always looked forward to especially the Rebel Boogie, which had every Rebelism in it, the chromatic downward riff, the Keith Moon like drum fills, the higher warbly riffs and of course the sweeping pedal steel guitar, drenched in reverb and sounding like a rocket taking off! Hamilton had that driving beat and odd sense of fills that made the song so much more exciting. 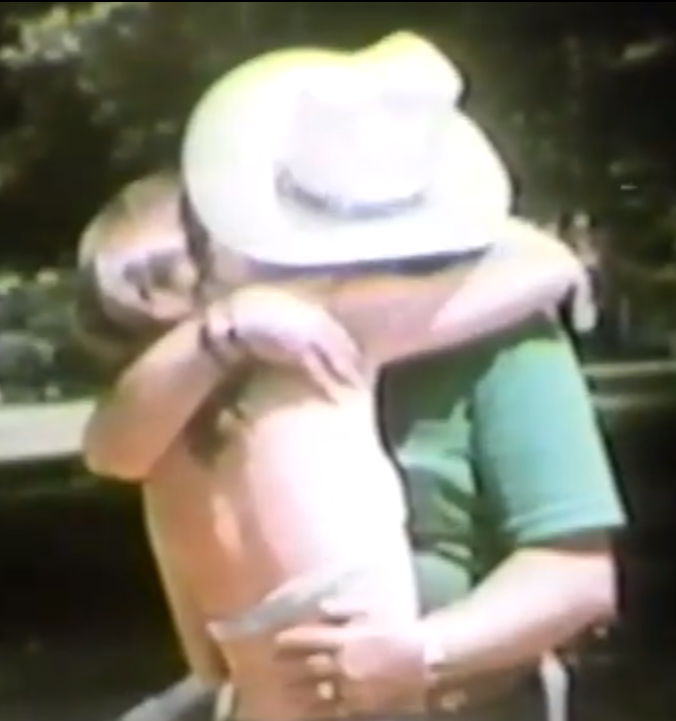 Well whenever I come in town
All them girls stop and look around
Some'll shiver, some they'll shake
Say "Good Lord! The Rebel ___

Rebel: I think if I had to say anything [that] caused most of my scenes -- I'm not an addict, or I'm not a man to go out an, what you say, get drunk or something like this. I take a drink; there's nothing wrong with that, and I don't buy anything else -- I guess my weakness would be women I imagine. But I also have an answer to this: I say, if God made anything better'n ladies he kept it to his self. So that's the way I part on this question. 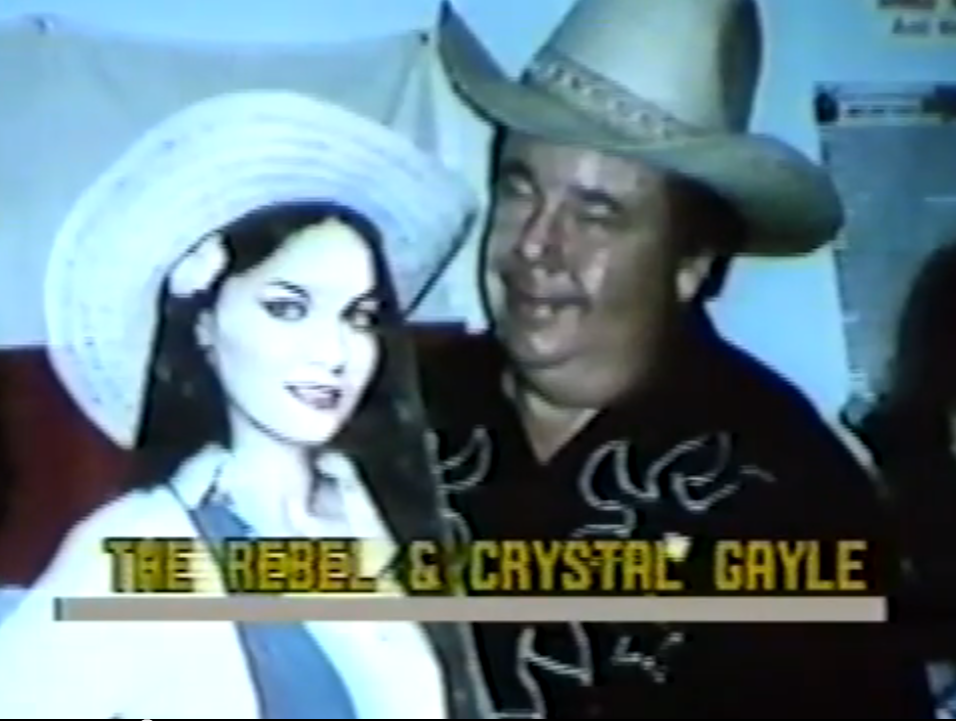 Bob: The Rebel was always showing pictures of him with famous celebrities.  Anywhere from genuine, to cardboard cutouts (Dolly Parton, Elvis) and a couple where he saddled up to a performer and got a shot of him with them as they were rushing out the back door photo bomb style. Ray Eicher, the teacher here [at Campbell's Music] who worked with the Rebelettes (guitar lessons), asked for a picture of Rebel with Isaac Hayes. Now Ray did this tongue in cheek and never expected Rebel to be able to pull it off, but damned if he didn't. It was genuine too. Rebel must have caught up with him in a back lot and got the picture!! Oh tonight the Rebel Star is shinin.
Oh the snow and rain is coming down.
I can smell those hamburgers fryin
And them dishes rattlin all around

They call me country
But Rebel is my name!

I jumped out of teen years a couple years ago. When I say you come nineteen,  then you become twenty-teen ____ they all say. But after that you become umpteen. See I'm getting around that line where you're umpteen like Jack Benny see. I'm gonna drop at thirty-nine and I'm gonna stay there, see! If anything I'm going backwards; I ain't going forwards, ya know. But I consider myself a teenager, like umpteen.... If you feel old, you can be nineteen year old and be old. Me I'm alive; I only live once. And I am gonna try and enjoy it. And I think I'm going to make my mark. People know I was here anyway.

Thanks to the Yahoos' Bob Campbell who also recorded under the names Ben Wah, Donovan's Brain, and Scattered Limbs for Bona Fide Records. He is currently the second generation owner of Campbell's Music Service in York, PA and their online store CMusicShop.com. 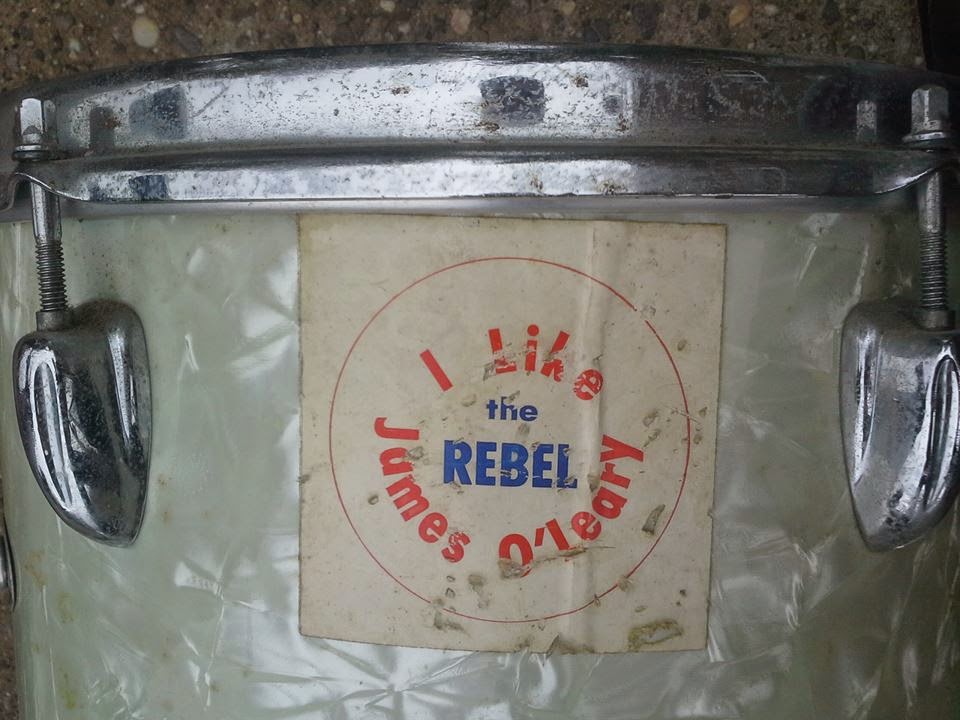 Thanks also to Tory O'Leary for inspiring my earlier post on the Rebel: "Leave My Grandpa Alone!"

Thanks to Yahoos sit-in drummer Rustle Noonetwisting for providing the Rebel video and postcards, and for inviting me to the Rebel's birthday party.

Stay tuned for more of the Rebel. I'm hoping to hear more from the O'Leary family! 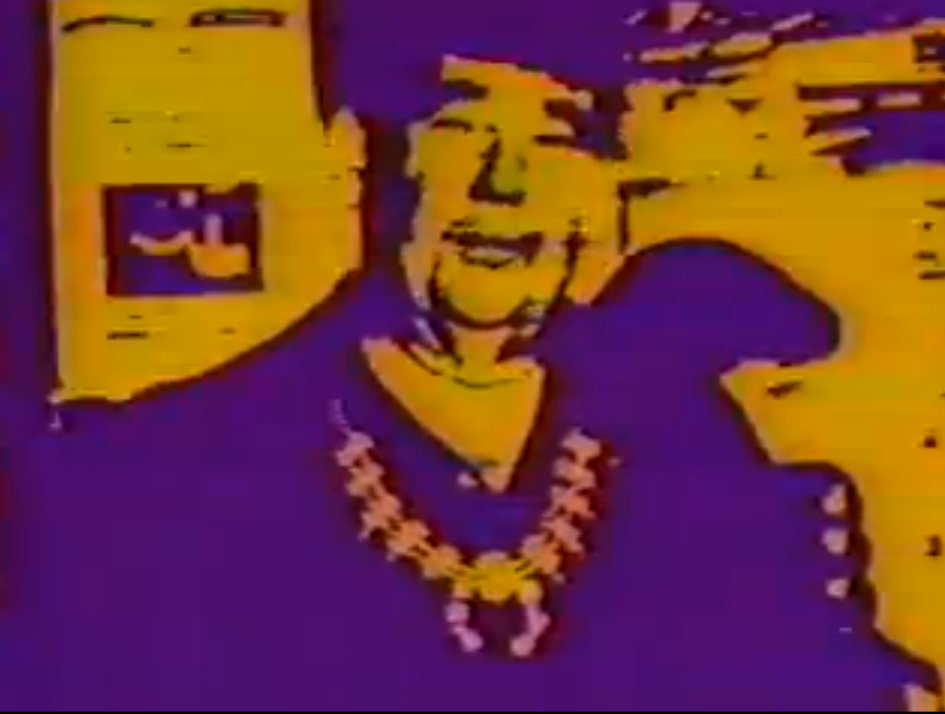