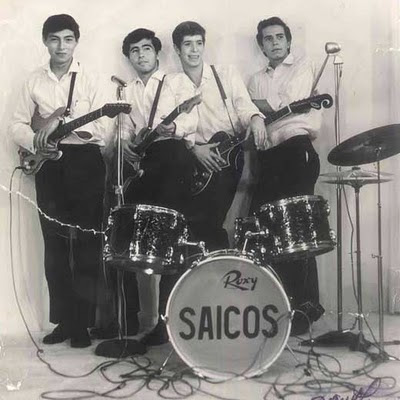 It remains a mystery to scientists (lower-case "s") how a small band of Peruvians in 1964 could have devolved to such heights of primitivism as Los Saicos. Given the lack of evidence to the contrary, I posit alien intervention or total bodysnatcherization. This type of monstruo-sludge could never have been dredged up by the ancestors of the highly sophisticated Inca Empire. Could such primitive sounds from the Anglophone world have filtered that far south via border-blaster radio and vinyl? The kids in Lima were certainly listening to the Beatles and the Stones, but did they know The Trashmen, The Rats, The Sonics, or Screaming Lord Sutch? The sound of Los Saicos would suggest that they had suffered prolonged exposure to either Surfin' Bird or atomic rays, however the fact that they predate The Cramps by at least 10 years leaves me convinced of the latter; resulting from the intervention by an extraterrestrial culture. Or was it the same aliens hanging around since the Nazca Line days? If earthly in origin, Los Saicos would have had to have devolved their South American swampy horror-rock sound spontaneously and parallel to the paleolithic sounds being generated in North America and England in a reversal of the debunked multiregional theory of the parallel evolution of Homo sapiens from Homo erectus. Sapiens did not do the nasty with Neanderthals everywhere! This, of course, leaves the missing link: Did Los Saicos read early manuscripts of the Celestine Prohecy and "vibrate" to another dimension? Or did they catch the Kon Tiki back to Australia in 1982 and abduct The Scientists?
[For Horace Miner, author of Body Ritual of the Nacirema]

The rest of Los Saicos 45s are downloadable from Dr. Schluss' Garage.
Posted by tomsun at 11:45 AM