"A Steamin' Stew of Mutant Spew" - The Deadly Spawn Compilation 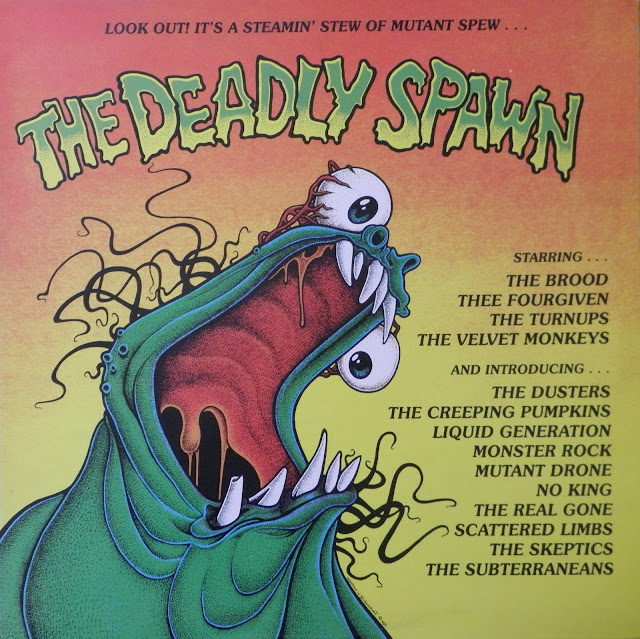 In 1985 we were getting fed a healthy diet of neogarage and psych from the grownups (Bill & Carl) over at the Web of Sound record store. ...The Scientists, The Nomads, The Lime Spiders, The Chesterfield Kings, The Hoodoo Gurus.... The Real Gone was slurping it up and recorded a live demo for Bill and Carl that found its way into the hands of Rick Noll, creator of York, PA's Bona Fide Records. Rick apparently liked it enough to include us on his followup to The Train To Disaster compilation if we re-recorded a song or two. So we borrowed a 4-track machine from friend and local punker Ray Rhythm, and laid down Bells Are Ringing, one of Dave's post-Vietnam era social protest songs. 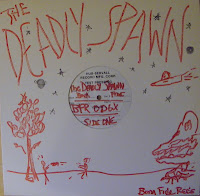 Many of the bands, including ours, had already broken up and/or were playing with some combination of The Left and The Skeptics before the record even came out in 1986, but it sure caught a moment in time. The A-side had all the big(ger)-name acts, or at least the bands that made an appearance on another compilation by that time. We made it onto the flunky B-side, but we were in dang-good company nonetheless. Where The Train to Disaster was a strange disjointed mess, in the best way possible, The Deadly Spawn was a solid batch of songs from some not-so-solid bands.


A-Side
The Velvet Monkeys - Rock Party (Washington DC) All we want is your girlfriend's love!
Monster Rock - She Lied (Frederick, MD) - members of The Left and The Skeptics.
The Brood - Writing on the Wall (Portland, Me)
The Creeping Pumpkins - Better Off Without You (Pompton Lakes, NJ)
Thee Fourgiven - The Wrong Side Of Your Mind (Hollywood, CA)
Liquid Generation - I Love You (Seattle, WA)
The Dusters - Everytime (Frederick/Hagerstown, MD) Another Left/Skeptics project. They opened the Hasil Adkins show in Lancaster that year.
The Skeptics - Legend of the Headless Surfer (Frederick, MD) from the Worry Beads cassette. Drummer Stephen Blickenstaff also did the monstrous cover art and the cover of the Cramps Bad Music for Bad People.

B-Side
The Subterraneans - Hammer of Love (Frederick, MD)
The Real Gone - Bells Are Ringing (Lancaster, PA)
Mutant Drone - Harvest Time (Richmond, VA)
Scattered Limbs - Walk Without Me (York, PA) made their only public appearance with James "Rebel" O'Leary at his birthday party at the local Goodwill.
No King - Restless Soul (Washington DC/Hoboken, NJ) featuring Rudi Protrudi of Tina Peel and The Fuzztones on harp.
The Turnups - Egypto-Tek (Harrisburg, PA) One of Central PA's first punk bands, circa 1980, with and without Billy Synth. 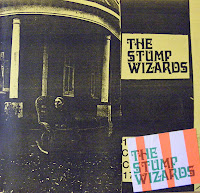 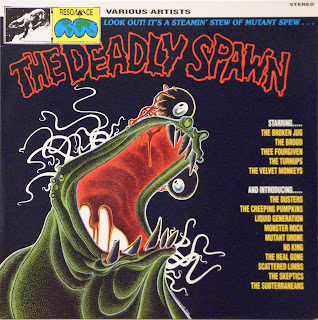 Added to the Dutch/German pressing on Resonance Records:
The Broken Jug - Son of a Gun (West Germany)