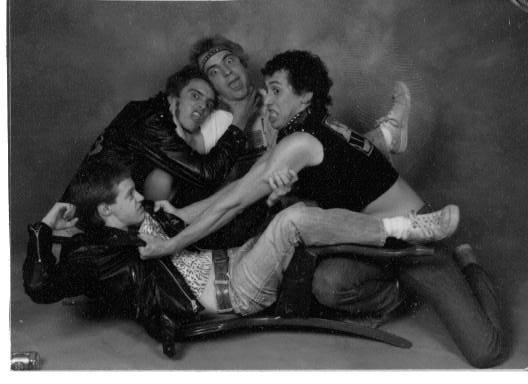 Gumby: Yo! I was talking to this guy* a couple weeks ago and the Bodies came up and I mentioned something about a gig and he said “holy shit! You were in the band? I think I have a tape” and a few minutes later brought out a tape that I gave to Johnny and he converted it. The results are.... 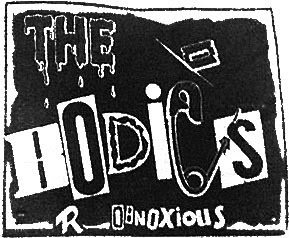 The Bodies were Lancaster PAs first punk band and helped spawn the original music scene that, a few years later became my escape from suburbia. In 1981/82 I was in middle school doing “the worm” to Rock Lobster at dances. I got a bass to play with the Sinister Lampshades and hearing about this band The Bodies was an early inspiration even though I never got to a show. In 1982 they played two nights with Scream from Washington DC. I badgered and wrangled a few old men into a group chat to see what they could remember. It went late into the night, and picked back up the following morning. These are just the highlights....

Gumby: LOL...I feel bad. He’s been asking asking me all this shit about the Bodies and I don’t remember. It was almost 40 years ago (!) and now we’re all in the same thread and HEY! WHAT THE FUCK?! ...that tape brought back a lot of hazy and really funny memories. Tommy seems to remember that a lot better than I do. That’s why I kind of bow to him. I was pretty wasted all the time and not him.
Drummers...you know... 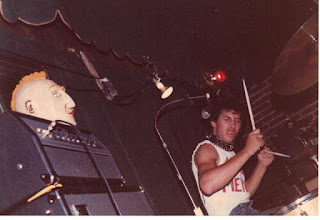 Tommy: So yeah.. The Scream shows were a big learning experience for us... It was a 2-night stand... Friday and Saturday night at Tom Paine's Back Room @ 317 N. Christian St. (aka BK's Back Room..aka Club 317) and would eventually become the "old" Chameleon Club.

Friday night Scream opened up for the Bodies. By the end of the 1st tune, after picking my jaw up off the floor, I realized we had made a big mistake having them open for us. All hell broke loose on stage and soon the stunned audience somehow snapped out of it and started slam dancing which only egged the band on even more. Then the shit hit the fan.. the music was so fast it made my head spin, but like an idiot I joined the cluster f**k on the tiny little dance floor anyway and got punched or elbowed in the face, (not sure which) kicked in the ass, and flung into the brick wall all in one tune which was pretty short if I'm remembering correctly.

At one point Pete Stahl was in the "mosh pit" (a term that didn't even exist at that point) and decided that he felt bad for the few people who were still sitting at tables and decided to 'share' the chaos with them by jumping up on the tables and kicking their beer bottles into their laps, or the floor or wherever. Tables and chairs strewn everywhere..beer and beer bottles all over the floor ..people skankin' everywhere.. it was pure pandemonium! 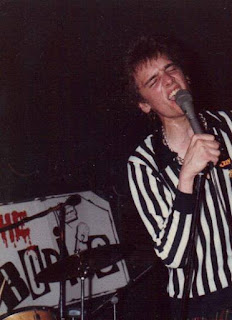 Gumby: Yup That’s what I remember too. You and me mesmerized. All I remember is you and me standing together watching their drummer and saying “holy shit”--Wasn’t he like 15 or 16? I remember some PA legal bullshit if he was even allowed in a bar.

...and Skeeter jumping off the stage and flattening a table.

Tommy: Scream sucked all the oxygen out of the room and left the stage and everyone in the room exhausted ...Including the Bodies..that had to go on after a break and try keep the crowd interested after seeing, what was at the time, THE MOST intense set of punk rock I had seen in my life.

The Bodies set was as good as it could be at the time. I remember we played everything faster in a futile attempt at matching Scream's energy, but I also remember our fans being really supportive, sticking with us and having a great time.
Gumby: The song would start and where the fuck am I and suddenly words would come out of my mouth. Funny thing is it’s still like that but I’m used to it. 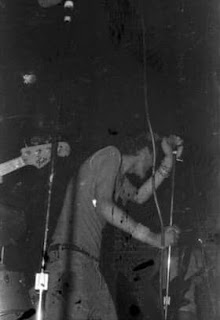 Tommy: It was almost like running a program.. it was total panic until we'd start the song then it was like it took on a life of it's own. It still feels like that to me except the tunes aren't as intense. When I listen to that bodies tape it I'm a little freaked out I was playing that fast!
I really wish I could find a recording of us covering the Dickies.. 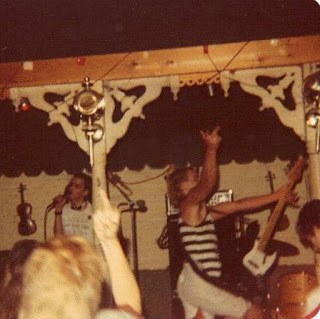 Johnny: Holy fuck, I woke up to this? Blah, blah, blah, blah...
The tape is a mix of both shows as best as I can tell. We averaged about two minutes of bullshit between songs, most of it not entertaining, that's why I chose to omit it. Mainly one annoying girl yelling dumb shit.
Gumby: LOL Yes Total chaos and then we’d play something. That was us!
And “Here’s some DEVO”
“FUCK YOU!” Yup, that’s our fans!
Johnny said there’s a LOT of that between songs, like we were really good on making 30 minutes of music last an hour.
And no, Johnny can’t remember the correct order... It doesn’t matter, really. It was pretty much complete chaos and we played what we played. Half the time people yelled a song and that’s what we played.
Johnny taught me how to play the bass lines [for "It Must Have Been Years"] so he could sing it because he thought the lyrics would be too far out for me. WTF? Dude, I’m the definition of “far out." Nonetheless, I did learn it. Goddamn bass players. No offense. [none taken -ed]

Tommy: The band members in Scream, as intense and even scary as they were on stage, we all really nice guys...approachable and supportive. I spoke with Franz Stahl after our set and he told me we sounded good but we should be focused on playing original music. We had a couple originals that night but we definitely picked up the writing after that show.

I also spoke with the drummer Kent Stax trying to pick his brain about playing that fast. I had just never seen anything like it before. I asked him what he liked to listen to and he said Black Sabbath... That made absolutely no sense to me because the dude played about 10 times faster than any Black Sabbath tune I ever heard. 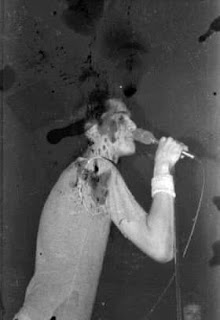 At any rate, after getting our doors blown Friday night, we switched spots on Saturday and opened for them instead. It was a great weekend!
It was like a dream for me back then.. It was like information over load so it was mildly traumatizing ...I tend to remember trauma.

Gumby: Lancaster was so bad back then. There was nothing to do and nowhere to go. You either made your own fun or rotted away like everyone else.

Tommy: Which is EXACTLY the reason why people still love the Bodies.. that was at the heart of what made that happen 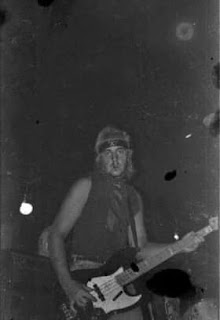 We went into the studio a few months back and recorded new versions of Rikers and Nuclear plus a bunch of covers and new material. Rick Bard is now playing guitar for us and my son Jake is on drums.
2020 Recordings
Nuclear War
Stuffed Crust Jesus
Know Your Product
Pretty Vacant
Turtlehead
Bad Guy Reaction
Rikers Island
Gumby: John’s been knocking out some good stuff! These were demos to send out to clubs and whatnot. Did them just in time for everything to close. There are outdoor places with live music but loud amps and obscenities aren’t exactly outdoor friendly.
*Thanks to "this guy," Woody Chandler, for salvaging the tape and for all the band members for their warm and fuzzy memories!

Studio photo by Olin Mills: Tommy: omg... olin mills... it was supposed to be a promo shot ..we had no idea how inappropriate it was at the time but 'Bill and Carl' generously donated the photo session and prints trying to help us get it off the ground.. Those 2 were central to the whole experience of that band. My memory is pretty foggy from that time but I vaguely remember meeting MDC at a party at their house as well members of Scream and the Chesterfield Kings.. Lotta shit went down a that house on Fairview Ave! Gumby: Inappropriate? Well, we were jackasses waiting in a hallway with a bunch of little kids, as I vaguely recall.

Get more of the story, pics, and tracks here: The Punk Starts Here ... The Bodies... (Lancaster 1981-82), and the band family tree they sired is all over this blog if you dig a little. 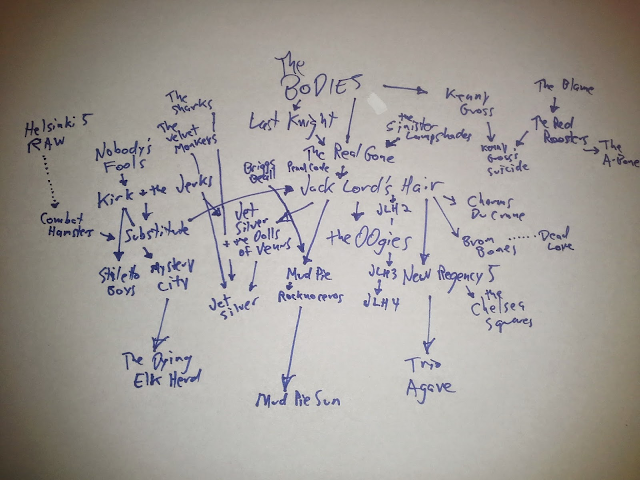